The Garrison principal, in his second year, talks innovation

It’s really busy here — there’s so much energy — and so much potential energy,” says John Griffiths, a few months into his second year as principal at Garrison Union Free School, which has 208 students from kindergarten through eighth grade. He says he was drawn to the school from his tenured position in the Somers district by the opportunity to innovate.

Asked to describe some of the changes underway, Griffiths began with Project Lead the Way, a science, technology, engineering and mathematics system used in the third to fifth grades that focuses on collaborative problem-solving strategies applied to real-world design challenges. Students use an iPad application to construct a test model before building a model as part of the standard science curriculum, he said. Teachers Amy Kuchera and Robin Waters participated in a summer training session and have been “chomping at the bit” to get going with it, he said. 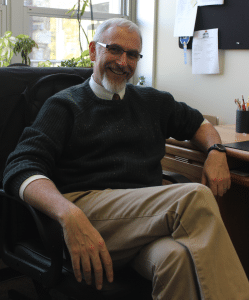 John Griffiths in his office at the Garrison School (Photo by A. Rooney)

To teach literacy, administrators and teachers looked at a variety of pedagogies and chose the Teachers College Reading and Writing Project in part “because it takes into account that if there are 20 kids, there could be 20 levels.” Most of the instructional time is spent on individual assignments. “Rather than having a reading textbook, it’s a strategy of giving them their own reading material, and having the teacher confer with each of them,” Griffiths explained.

Garrison began a new rotation this year of “specials” — art, physical education and music. It had included library, but that has been dropped for a program called Literacy and Speech.

“As much as I value having a vibrant library as a centerpiece of the school community, a lot of library content was being delivered by classroom teachers,” Griffiths said of the change. “If it’s happening well in the classroom, it becomes redundant. We asked ourselves, ‘Is there another aspect of literacy to put a spotlight on?’ and came up with listening and speaking.

“I’m very concerned that so many kids are staring at phones constantly,” he said. “Last year I saw a real lack of skills in how our students could confidently present their ideas to their peers. Watching debates, I found an inability to listen for the flaws in their opponents’ arguments.”

Griffiths recruited a middle-school teacher, Ian Berger, who is interested in drama, debate and design, to create an “active literacy” program with instruction in speaking and listening as well as in multimedia: how to use design, color, texture, still images, graphics, moving images, spoken word and music to create impactful messages. “We’re still fleshing it out,” said Griffiths. “It’s not a packaged curriculum.”

As a result of the rotation change, the Library Media Specialist position had its hours reduced significantly, something Griffiths called “a tough decision.” The teacher in that position wound up departing for another job.

In terms of technology on hand, Griffiths said every middle school student this year was assigned a Google Chromebook, and laptops were added to each classroom in the elementary grades. Last year all fifth- through eighth-graders were given a school-use Google email account, with access to all Google apps; that has been extended this year to third- and fourth-graders.

In addition, teachers are able to use Google Classroom and Google Drive, which allows students to complete and submit homework online for grading. “It’s not just tech for tech’s sake, but it’s changing teaching and learning,” Griffiths said.

The school has also been devoting more time to the social and emotional components of the day, working to “give the students tools to serve them well, along with good coping skills,” he said. These tools include moments dedicated to “breathing, meditation, silencing oneself,” Griffiths said.

“The past two mornings, sixth-graders have spent the first few moments being quiet,” he said. “They’ve been asked to notice two new things while walking between buildings and also to think about somebody who really should have a good day, adult or student. Our school counselor reports no giggling, no noise. It’s been amazing seeing that some very simple, deliberate directives are helping them move through the school day.”

The campus, meanwhile, is undergoing capital improvements. Each kindergarten through fifth-grade classroom has new furniture, while a team of students, teachers and community members are redesigning what used to be the speech and special education room into a nontraditional learning space.

A small school garden, managed by Hudson Valley Seed, has been moved to a brighter, 40-by-50-foot plot with three raised beds. Students grow vegetables, most of which are donated to a Beacon food pantry and the rest used for educational activities.