An aspiring actor finds herself in a cutting-edge business

It was a required college course that caused Allyson Vermeulen to shift from her plan to become an actor to costume design. That, in turn, led Vermeulen to a career as a tailor. In her Beacon shop, By A Thin Thread, she handles everything from making adjustments for brides who want to feel spectacular to adding a zipper that finally works to a beloved winter jacket to the occasional custom piece.

Vermeulen, who attended Fordham, says she was placed in the costume shop as part of her acting coursework and found it a perfect fit.

“The acting program was abstract, and I wasn’t sure it was for me, but the costume work was concrete and tangible,” she recalls. “If something wasn’t perfect you could take it apart and make it perfect.” 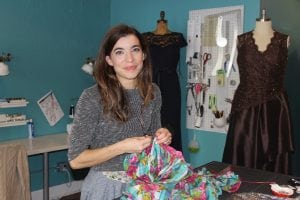 By A Thin Thread’s Allyson Vermeulen, sporting her ever-present scissors. (Photo by A. Rooney)

During theater production internships that followed, she was able to shop for and build costumes and assist with fittings. “The more I hung out in the costume shop, the more at home I felt,” she says. “You don’t end up where you think.”

She and her husband, who is a lighting designer, have three sons. When the boys were young, Vermeulen began making dresses that were sold at the Echo boutique on Main Street. They were so popular that Vermeulen began looking for a space away from home to sew and meet with clients. She rented a studio at the old Beacon High School, then tried three other spaces, including a former apartment in which the kitchen became her fitting room. Two and a half years ago, Vermeulen moved to a larger, newly renovated space adjacent to the Beacon Theatre.

Vermeulen sees customers only by appointment, which she says helps her juggle the demands of parenthood. “I’ve never posted set hours because there are always things that come up,” she says. 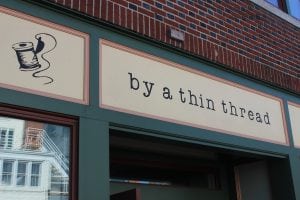 By a Thin Thread is located at 445 Main St. in Beacon (photo by A. Rooney)

Since becoming street-visible, her business is now almost all alterations. “There are constant calls from brides and bridesmaids, in particular, jobs with hard, fast deadlines,” she says. “Dresses are very often bought online, with plugged-in measurements. Brides are always fun to work with because you become part of someone’s wedding day, and they’re so excited.”

At times Vermeulen must gently communicate that a hoped-for alteration isn’t possible, especially when dealing with vintage items. “You have to explain what is structurally possible, in terms of expectations, like, yes, it’s your mother’s wedding dress, but it can be contemporized,” she says. Other times an alteration is possible but not recommended, such as adding sleeves to a strapless dress. “It can be done, but it won’t look like the photo you saw on Pinterest,” she says.

Most of her customers are women. Among the men, she says many are uncertain what they need done. “The silhouettes of men’s clothing have changed a lot,” she says. “Men’s pants now are so narrow they don’t break over the shoes. So I’ll ask them specifics: ‘Do you want your socks showing?’ Some buck the trend and simply go with what they like.” 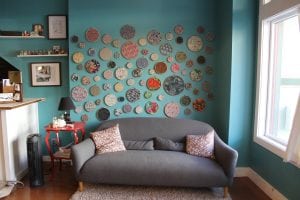 The vintage feel of By A Thin Thread extends to the front of the space. (Photo by A. Rooney)

A chalkboard at her shop details standard services and prices. They range from fixes to overhauls: patches, hems plain or lined, waists taken in or let out, darts added, shortening sleeves, vented or unvented, bustles and making pole pockets for curtains.

Vermeulen says many customers tell her they are thankful to have a local tailor. “People say, ‘There are none of you out there anymore,’ which surprises me a little,” she says, noting there are many sites devoted to sewing, although the work of a tailor is more complicated. “For me it’s a puzzle taking things apart and putting them back together so that you can’t tell that I touched it,” she says. “I don’t take shortcuts.”

One thought on “Altered Plans”