The holiday season can sometimes seem like an obstacle course — a competition, a social trifecta — to be endured as much as enjoyed. Human bonding and fellowship are not to be avoided, but I suspect there’s some part in all of us that longs to return to something more genuine than the desperation (Bigger! More! Better! Now!) that infects this festive season. It’s not for nothing that Robert Burn’s melancholic poem, Auld Lang Syne (literally “the old long since”), became one of the most familiar holiday ballads, a dewy-eyed celebration of time’s passing.

Upside-down cake seems a fittingly retro and nostalgic way to finish off both a holiday dinner and this outrageously cockeyed year.

I encountered a version of this cranberry upside-down cake on David Lebovitz’s always-engaging food blog. It seemed a perfectly surprising-but-obvious addition to the holiday food canon. Further investigation revealed numerous iterations, not surprisingly a Chez Panisse/Alice Waters version (Lebovitz is a Chez Panisse-trained chef alumnus and acolyte of Waters and her pastry chef Lindsay Shere) most likely picked it up. 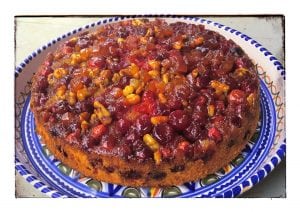 This is a simple skillet cake, a testament to vernacular cooking and pioneer food that would not have seemed out of place on an early American groaning board. (The 1950s sliced-and-canned pineapple and Maraschino-cherry-bedecked version that probably jaundiced our collective opinion was actually a Betty Crocker adaptation of untold humble one-pot or one-pan fruit pies, cakes and cobblers.)

Tart cranberries adapt well to this treatment; either fresh or frozen will do. A bit of corn meal adds some texture to the cake, but I can’t help but think that some almond, hazelnut or walnut meal would be even more welcoming. In the spirit of the season, I added toasted, chopped walnuts and candied orange peel to the topping; in the same spirit a bit of orange zest livens up the cake. A bit of curry powder (a trick I picked up and must attribute to Bobby Flay) adds a mysteriously indefinable spice to the caramelized topping.

Pure animal instinct says a dollop of whipped cream, crème fraîche or vanilla ice cream would work as a topping but on its own this makes a fine Christmas coffee cake.

In a 10-inch cast-iron skillet, melt 4 tablespoons butter and brown sugar together; whisk until sugar is liquefied and just beginning to bubble. Whisk in curry powder and remove from heat and set aside. Heat the oven to 350 degrees.

In a bowl, whisk together flour, cornmeal/polenta, baking powder and salt. Reserve.

In a mixing bowl, beat a half-cup of cubed butter, granulated sugar and orange zest with an electric mixer at medium high speed until light and fluffy (3 to 5 minutes). Reduce mixer speed to medium and add eggs one at a time, stopping occasionally to scrape down the sides; mix in vanilla.

On low speed, add half of the flour mixture, then the milk followed by the remaining flour mixture. Mix until just fully combined — do not overmix.

Bake in the center of the heated oven 45 to 50 minutes until top is golden brown. Remove from oven and let rest 10 minutes. Run a knife around the edge of the skillet and place your serving plate upside down on top of the skillet. Using oven mitts, flip the skillet and plate to release the cake. This cake is best served the same day, warm, but can be rewarmed in the oven or microwave up to a day or two later. Whipped cream, crème fraîche or vanilla ice cream not necessary, but then again…