There was more good news this week for Deb Lucke, the Cold Spring author and artist who was profiled Oct. 9 in The Current after the rights to her best-selling graphic novel, The Lunch Witch, were acquired by Amblin’ Partners to create a live-action film. Kate McKinnon, best known for her work on Saturday Night Live, has agreed to star in the film, which will be directed by Clay Kaytis, who previously co-directed The Angry Birds. 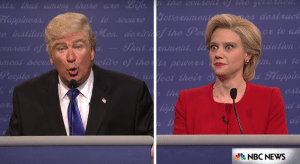 McKinnon, who has seen a lot of airtime on SNL portraying Hillary Clinton, starred in the recent all-female remake of Ghostbusters. She will take the role of Grunhilda, an out-of-work witch who takes a job in a school cafeteria.

“Who knew my doodles would have the power to turn a beautiful and talented young actress into a mean, old hag?” Lucke wrote in an email. “It’s almost as if I cast a spell! I can’t wait to see what she does with the character.”