Employees of the Dutchess County district attorney’s office often work long hours, but only one of them is allowed to sleep on the floor.

That employee is Bosch, a service dog purchased by the DA’s office in 2015 using funds forfeited in criminal-court proceedings. His wagging tail and slobbering tongue belie the important duty he’s been assigned: to comfort the most vulnerable people in the courtroom.

The practice of using service dogs in court is fairly new, but for Bosch it’s part of the family business. His great-grandmother Rosie, named in honor of Rosa Parks, made headlines in 2011 when she became the first service dog in the state to accompany a minor to the witness stand. In that case, Rosie sat silently at the feet of a 15-year-old testifying at the Dutchess County Courthouse after her father raped and impregnated her. As part of Rosie’s training, the Golden Retriever could sense when the girl was under particular emotional stress and snuggle up to her. 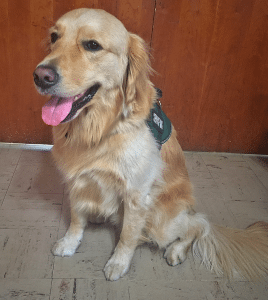 Bosch in his green service jacket (photo by B. Cronin)

“When Rosie was on the witness stand, she was extremely well-behaved,” recalls Kristine Whelan, chief of the Dutchess County Special Victims Bureau. “She didn’t bark or jump up. That’s how she and Bosch were trained, for that purpose. She was very unobtrusive.”

Rosie’s turn on the stand resulted in a conviction but also controversy: The defense attorneys charged in their appeal that Rosie unfairly engendered sympathy toward the girl, swaying the jury. The appeal was unsuccessful, which helped to not only build precedence for the use of service dogs in court but acceptance of the idea as well, as the judge noted that having Rosie on the stand was no different than a 1994 case in New York State in which a child witness was permitted to bring a teddy bear.

“We’re about seeking the truth,” Whelan says. “If a child is unable, due to fear or trauma, to articulate what happened to them, how is that seeking justice? How is that finding the truth? So I feel very strongly that whatever we can do for victims to make the process easier, for them to be able to tell what happened, then that’s what we should do.”

Bosch hasn’t been on the witness stand yet but has appeared in court twice: To accompany a victim at a sentencing hearing and once when a victim watched the proceedings. Even when Bosch is not in court, he helps out at the office to comfort victims preparing to testify. Although state law only allows service dogs to accompany minors to the witness stand (a law Whelan would like the see changed), Bosch works with victims of all ages at the office. 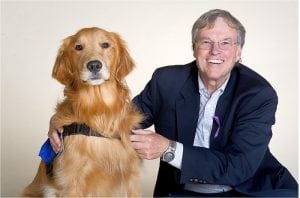 “Any time we can make victims more comfortable with the process it’s obviously a huge benefit for us and for them,” Whelan explains. “Even the idea of coming to the district attorney’s office is, for some victims, quite traumatic. Bosch does what he was trained to do: comfort them, and help them through difficult situations by being there for them, to pet or hug. Some of the kids get down on the floor and play with him.”

On days when Bosch isn’t needed, he is picked up by Kathy Peluso, coordinator of training and outreach for Family Services to assist with trauma counseling at its Poughkeepsie office.

“We love having him here,” says Peluso as Bosch curled up at my feet. “And you see how he’s sitting there with you, looking up at you? He’s assuming because you’re sitting here talking to me that you’re a client.”

Both Bosch and Rosie were trained by Educated Canines Assisting with Disabilities, an organization based in Connecticut. Although he can understand some 80 commands, the retriever’s most impressive skill is the ability to sense changes in a person’s emotions, even in a crowded room.

Peluso said Bosch once accompanied a Family Services therapist to a college where the therapist was giving a presentation on sexual assault and domestic violence. During the lecture a student who was a trauma survivor became upset and left the room, unnoticed by everyone except Bosch, who walked over to the door. When she returned, she found Bosch waiting for her. He walked her back to her seat and stayed with her for the remainder of the lecture.

Both Bosch and his handlers at the district attorney’s office and Family Services must be recertified each year, a test that culminates with Bosch being walked through the Poughkeepsie Galleria to see if he can remain focused.

Bosch, who will turn four on Christmas Day, responds to commands as long as he’s wearing his green service jacket. When the jacket comes off, such as when he goes home with one of the assistant district attorneys at the end of the day or during lunch, the change is dramatic.

“I’ll show you,” says Peluso, carefully removing the dog’s jacket. Bosch stands up, walks to the center of the room and lies down with his eyes closed. “He’s relaxing now,” Peluso explains. “He knows he’s not working.”

One thought on “Legally Blonde”