Real-estate agent came within one lukewarm score of Olympic medal

Michael Seibert grew up on the ice. A talented figure skater who became an ice dancer, he advanced from regional competitions to nationals, and on to the Olympic Games. He and partner Judy Blumberg won the U.S. national championships five consecutive years beginning in 1981, took home bronze at the world championships three times starting in 1983, placed seventh in 1980 at the Lake Placid games and then fourth — the spot that’s almost worse than fifth — at Sarajevo in 1984.

More than 30 years later, Seibert, 56, who lives in Beacon, has left the ice to work with other surfaces — he’s an interior designer (michaelseibertdesign.com) and also a real-estate agent for Houlihan Lawrence in Cold Spring. 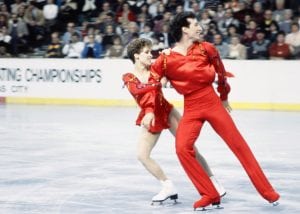 Judy Blumberg and Seibert at the U.S. National Championships in 1984 (Photo by Christie Jenkins)

Like any other athletic pursuit, Seibert’s career had its triumphs and disappointments. Growing up, he practiced for more than five hours a day, six days a week, moving around the country to work with various coaches. He and Blumberg did not expect to win gold in 1984 — this was era of the dominating British skaters Torvill and Dean — but knew bronze was within their reach. And they would have been on the podium except for a single judge who gave them a 5.5 for interpretation because she didn’t like the music they chose. The piece, Nikolai  Rimsky-Korsakov’s Scheherazade, “didn’t conform to the rules of dance,” insisted the judge, Cia Bordogna of Italy. “The music must also be able to be danced to on Earth. Technically, they were at a very high level. Their skating was really almost perfect.”

Says Seibert now: “It hits you like a ton of bricks. It takes a long time to recover from it …. There’s a giant realization that you’ve done all this for five minutes that were beyond your control.”

Ironically, the first Americans to win Olympic gold in ice dancing, Meryl Davis and Charlie White in 2014, skated to Scheherazade. “We were just 30 years ahead of our time!” says Seibert with a smile. 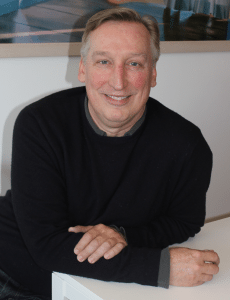 Michael Seibert (photo by A. Rooney)

After the 1984 Olympics, Seibert competed for another year or two, then skated in ice show tours before shifting to choreography and directing, mostly for the show Stars on Ice, founded in 1986 to showcase gold medalist Scott Hamilton. Describing that period as the “golden age” of skating, Seibert was part of the creative team that in 2003 won a Primetime Emmy Award for choreography.

Seibert also worked for several years on a live ice-dancing show for the Canadian Broadcasting Corporation called “Battle of the Blades” that paired professional hockey players with figure skaters. 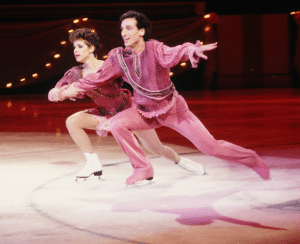 Blumberg and Seibert at SuperSkates in 1984 (Photo by Christie Jenkins)

As a child growing up in the Pittsburgh area, Seibert wasn’t considered for training as a competitive skater until he was 13 and by then was too old to perform solo, with its emphasis on jumping. But his coach at the time specialized in ice dancing, so that’s where he gravitated. Today Seibert occasionally coaches recreational skaters; he has students at rinks in Katonah and Newburgh. “I like to teach adults with a focus on health and exercise — it’s so much fun,” he says. “Other coaches think I’m out of my mind, but I love skating in a different way, not in a competition mode.”

While working on Stars on Ice, Seibert lived for about six months in a Manhattan loft, which he decorated. The results, featured in Metropolitan Home and Elle Décor, led to other commissions and got him thinking about a new career. He honed his skills after a move to Palm Springs, California (his work there was featured in Interior Design), and came to realize that his experience working on ice shows translated well.

Catching Up with Judy Blumberg

Blumberg, who grew up in Tarzana, California, first skated with Seibert in 1979. “You know when you move similar to someone, when your knees work with someone,” she has said. While ice dancers typically used ballroom music, the pair became known for using songs preferred by figure skaters, including selections by Elvis Presley and Patsy Cline.

They parted ways in 1992. Blumberg wanted to continue skating but Seibert was ready to come off the ice to choreograph and direct.

Blumberg skated for another three-and-a-half years with a new partner, Jim Yorke, and later became a commentator for CBS Sports and ensemble director for the Ice Theatre of New York. Today she lives in Sun Valley, Idaho, where she teaches and coaches.

“I had never set a tile or guided a backhoe or many of the other things being done, but I didn’t have to,” he says. “What’s important is knowing the sequence, the order, the needs. I didn’t know how to program lights [for the ice show], but I knew how much time you needed to do it right. And from years of having hard openings with set dates because an audience would be in their seats and the show had to be ready, I gained skills I could apply” to renovating houses. “In devising the plan, you have to have flow. Ice shows use space and it’s all about flow.”

Returning to the East Coast with only a few suitcases and his skates to work on “Battle of the Blades,” Seibert was introduced to the Hudson Valley while staying as a long-term guest at a friend’s place in Red Hook. Commuting to the city, he cast his eye on the Peekskill to Beacon area, thinking it seemed removed enough from the city to feel rural but close enough to reach his design jobs. Driving into Beacon on a snowy January day, he was charmed. “Driving along Main, west to east, looking at the mountains, it reminded me of Lake Placid and it felt right,” he recalls.

Seibert, who along with Blumberg was inducted in 1996 into the U.S. Figure Skating Hall of Fame, says he no longer skates. “When you train six days a week for all those hours, your skills are fine-tuned,” he says. “When you don’t put in those times, the skills go away, and it’s disappointing. It’s been a wackadoodle life. But it’s OK — I’m a very happy has-been!”