That our county legislature’s majority now routinely overreacts to any criticism of how it handled the new Cold Spring senior center lease was evident when it dismissed Legislative Counsel Clement Van Ross on Jan. 3, a year before his term was to expire, without explanation (Putnam Legislature Fires Counsel, Jan. 6).

Your report was on target to pair this unexpected development with a recounting of the complaints these legislators made against him when his legal opinions of the Putnam County charter temporarily delayed the passage of the revised lease and gave the public access to its contents. 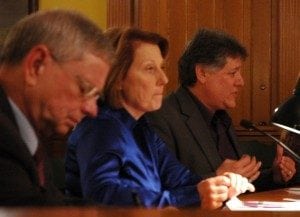 With feelings so sore among our elected representatives, the county  needs a different perspective on many substantive, unanswered questions about these incidents that limit our right to a fully accountable, transparent county administration.

As many of your readers know, right before the legislature fired Van  Ross, the Rules Committee voted down asking New York State Attorney General Eric Schneiderman about the legality of offering a free and then after-the-fact underpriced special bus service to Philipstown seniors so they could witness the county legislature tackle the controversial senior center lease in Carmel.

In addition, it disregarded repeated and unprecedented cancellations by Putnam County Senior Resources Director Pat Sheehy to appear before them for an unscripted interview about her part in arranging the bus service and a taxpayer-financed awareness campaign to promote the lease.

At this juncture, I urge Putnam District Attorney Bob Tendy to step up to the plate. The Rules Committee ignored my suggestion it consult him as an alternative, but it can’t ban Tendy from starting his own investigation of these unorthodox activities and expenses.

Tendy volunteered his Second Amendment views when he argued against a Philipstown proposal to enforce safe storage of firearms. He can do the same with other potential forms of government overreach. Furthermore, one of his predecessors as Putnam DA, former Legislator Kevin Wright, introduced the idea of contacting our attorney general.

Here are five reasons why I believe Tendy must provide us with his professional guidance and insight:

At the Dec. 19 Rules Committee meeting, Legislator Carl Albano called an end to the discussion. For him, those on the legislature who remain concerned about what happened can voice their disapproval, but it wasn’t worthy of a high state official’s attention.

One thought on “Letter: County Accountability”