At least on paper, Putnam County’s annual sales-tax revenue rose in 2016 by 9.5 percent, the second-highest increase of any county in New York.

In reality, the rise is less rosy than it seems.

According to Putnam County statistics and a Jan. 30 report from the New York State Comptroller’s Office, the county’s sales-tax income grew to just over $59 million in 2016 from just under $53 million in 2015.

However, most of that upswing reflects what the Comptroller’s Office termed “distribution adjustments” across years, due to the arrival of late or revised returns or to unspecified “technological” tweaking. Such adjustments to the data for Putnam and two other counties with notable increases boosted their numbers.

Putnam County Finance Commissioner William Carlin said the adjustments, totaling $2.7 million, accounted for more than half of the 9.5 percent rise. He also explained that the state does not reveal exactly why adjustments occurred and noted that this was not the only time Putnam has seen the adjustments affect its numbers.

Nonetheless, in recent years, Putnam’s sales-tax income has gone up.

Carlin said that from 2014 to 2016, sales-tax revenue rose by 5.7 percent. “Certainly that tells a different story than a 9.5 percent increase in one year,” he said, noting that sales-tax income can fluctuate dramatically. “In 2008, Putnam had the highest sales-tax growth,” he noted, but a year later, it “had the highest decline in the state.”

Sales-tax revenue throughout the state rose by 2.3 percent last year, which the Comptroller’s Office considers “sluggish.” However, the Mid-Hudson Valley had the best regional increase at 2.9 percent. Dutchess County revenue rose 1.4 percent and Westchester’s 1.3 percent. Chautauqua County had the largest jump, 12.7 percent, after raising its sales-tax rate.

+ Outside of New York City, 11 of 57 counties, including Putnam, do not share sales-tax revenue with local governments. (None of the 11 have cities.) Under a formula it adopted in 2013, Dutchess County distributes a flat $25 million from the 3.75 percent it collects. Poughkeepsie receives 38 percent ($9.57 million) and Beacon 17 percent ($4.16 million).

+ Ninety-three percent of New York residents pay at least 8 percent. The highest rate in the nation is in New Jersey, where some residents pay 12.875 percent.

Unlike 46 of the 57 counties outside New York City, Putnam County does not share the sales taxes collected, a longstanding point of contention in Philipstown, where many tourists spend their cash.

At the Philipstown Town Board meeting on Feb. 16, Councilor Nancy Montgomery said the $5 million rise in sales-tax revenue between 2015 and 2016, although exaggerated by the state adjustment, still “makes us wonder once again what we are going to do about getting” a portion. The adjustment, she said, “does not mean there wasn’t some growth; even if there wasn’t, we are still looking to get our fair share.”

Councilor Mike Leonard proposed that the county use some of the higher revenue to replace funds it cut from its allocation for the upkeep of historic cemeteries. That appropriation dropped from $12,000 in 2016 to $8,000, divided among six towns. The county can afford to put at least $4,000 back, he said. 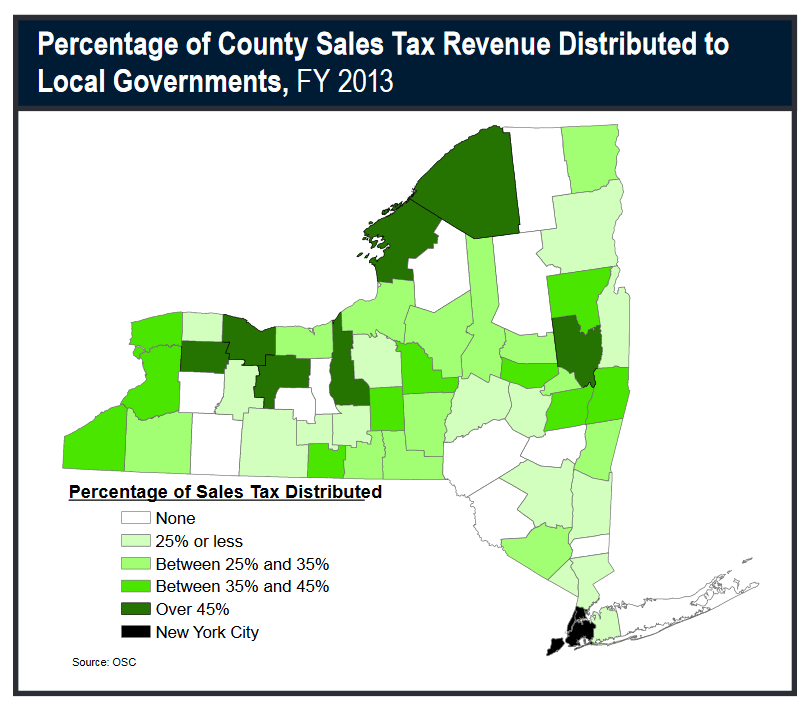 Source: Office of the State Comptroller

Leonard said Feb. 27 that cemetery committees from the six towns hope to convince County Executive MaryEllen Odell and legislators to restore the funding. The consistent rise in sales-tax revenue “should have delayed their need to cut what is clearly a shameful, low amount to begin with,” he said. “I would have found a way if I was handling the county budget. But then you have to care, first.”

Odell relies each year on sales-tax revenue to fill county coffers. In the projected 2017 budget, it accounts for 37 percent of projected revenue. (Other sources include property taxes, state and federal funds, and fees collected by county agencies.) When Odell went through the numbers at a public presentation in October, she called sales-tax revenue “critical to financial stability of the county” because it “offsets the need for higher property taxes, and/or reducing services.”

Carlin maintained that the county already shares sales-tax revenue, “not the actual cash” but “by paying for such services such as community-college tuition and election expenses not presently charged back to municipalities, as is done in other counties.” Most important, he said,  Putnam “guarantees 100 percent of the property-tax collections of each municipality in the county” — covering losses when someone fails to pay.

“That creates a demand on our cash flow that requires the county to keep these funds,” he said. Otherwise, it would need to borrow the money, which is “not a scenario that we would recommend.”

Carlin also observed that the county uses sales tax to fund actions mandated by state or federal governments. “As long as there is no meaningful mandate relief,” especially given the state tax-cap that limits how much municipalities can raise property taxes each year, he said, “the pressures on the county budget will be too great to share sales-tax revenue. The numbers simply won’t add up.”

So far this year, the sales-tax fortunes look promising. A chart provided legislators for a Feb. 27 meeting showed that in January the county collected $4.47 million, or $237,300 more than the same month last year.