The first Pentecostal church did not arrive in Beacon until 1951, with the founding of an Assembly of God congregation. But by 1974 the group had dwindled to only a dozen people and its Delavan Avenue home was slated to become a funeral parlor. Asked to preach before the shutdown, a young man named Phil Aarstad wound up reviving the church and staying for 40 years.

By the time the Rev. Aarstad retired in 2011, the church had become non-denominational and renamed The Oasis. He turned the reins over to his longtime assistant, his eldest son, Mark, who changed the church’s name to Salem Tabernacle, a reference to the word shalom and a Brooklyn church called Salem Gospel Tabernacle that his family attended. 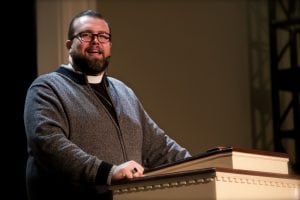 Today Salem Tabernacle has nearly 400 people in its congregation yet remains unfamiliar to many Beacon residents, something the younger Aarstad says he is working to change. While his father was well-known in the city, “because I was assistant pastor for 17 years and came from here, I never went around and introduced myself,” he concedes. (He and his wife, Danielle, who oversees the music and women’s ministries, have three children: Haakon 19, Bryn 16, and Lena, 12.)

Pentecostalism is a Christian movement centered on the belief that one’s faith must be experiential and dynamic, driven by the power of God moving within the body and mind. Those traditions mingle today at Salem Tabernacle with an emphasis on ancient liturgies, Aarstad says.

The fact that the church is non-denominational is a draw, he says, especially among Christians who dislike what they perceive as the “hang-ups” of denominations. In the past few years, Aarstad has led the church toward the “Christian convergence,” which he describes as “bringing in the best in tradition and matching that with contemporary ways of expression.” 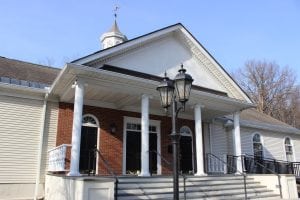 Salem Tabernacle (photo by A. Rooney)

While Aarstad has introduced many changes, “this congregation has a lot of trust, an intellectual curiosity and an open-mindedness, as opposed to the small-mindedness of fundamentalism,” he says. He notes that the term pentecostal is often misunderstood, especially as applied to Salem Tabernacle. “Pentecostalism for me is not a flat, monolithic thing; it’s diverse,” he says. “Our vibe and style is undoubtedly Pentecostal. It’s an interesting amalgamation: a little sweaty, a little Hammond B3 organ, part Book of Common Prayer.”

Music is a vital part of that equation. In college, Aarstad taught himself to play piano and wrote songs. After he graduated, he took over the music at the church, serving under his father from 1994 to 2011. “I brought in the sort of music I gravitate to: James Brown, Fred Hammond, Andraé Crouch,” he says. “I was changing the sound of the church from white evangelical music to black gospel.”

Aarstad says visitors to the Sunday service should expect to be surprised. “We start with a formal call to worship and reading from the lectionary,” he says. “Then the band kicks in. This is not a church where you’ll hear moralism, and there are no politics. The high point of our service is a celebration of the Eucharistic liturgy; very spirited and personal, not rote or mechanized.” 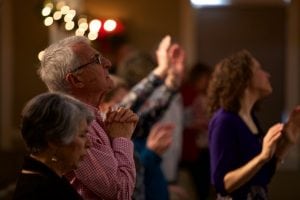 The pastor says his church’s greatest challenge is to make Beacon a better city by “finding a way to help the schools flourish, to help people get out of their poverty, to support the arts and commerce, and help police and government officials resolve the challenges they face.” He adds: “That’s God’s intention for sending his son. There’s an improvement in a quality of life that comes because of the presence of Jesus in this community of Salem. This year we’re 66 years old. When my dad came here things were different — the principal asked clergy to walk through the halls of the high school because of racial tension.”

Aarstad says when he realized he had not embraced his hometown as his father had, he visited Mayor Randy Casale, “apologizing for our low visibility,” he says. “He introduced me to Better Together, which is led by Rabbi Brent Spodek [of Beacon Hebrew Alliance] and Pastor Ben Larson-Wolbrink [of First Presbyterian]. It’s been a great personal relationship, despite the pastor and rabbi’s liberal traditions and my conservative tradition, both theoretically and politically.

“It’s been great to work together to present to the greater community the brotherhood and sisterhood of faith,” he says. “The benevolence in their hearts allows them to be candid. It frees you up to be honest and have healthy dialogues. It’s an assist to the city to have clergy who rise above differences. It doesn’t happen everywhere.”

For more information on the church, located at 7 Delavan Ave., call 845-831-0114 or visit salemtabernacle.com.

One thought on “Having Faith in Beacon”