The one-two combination of river and mountains has drawn people to the Highlands for decades, if not centuries, turning many into hikers, kayakers and outdoorsy types. The mid-Hudson branch of the Adirondack Mountain Club (ADK) was formed in 1947 by a collection of those folks, many of them associated with Vassar College.

Since its inception, the chapter — one of 27 nationwide, with 30,000 members — has extended its reach west and south of Poughkeepsie and now includes the Highlands. It has 750 members who take part in organized outdoor activities, classes, trips and conservation. Its backpacking trips and canoe expeditions are paired with trail-maintenance “work parties” in a swath that stretches from the Shawangunk Ridge to Harriman State Park. 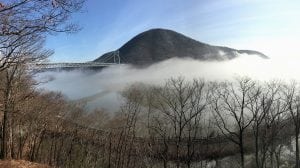 The national ADK was formed in 1921 to help New York state develop trails and shelters to reach remote areas of the Adirondacks. It also hoped to publish trail maps and guides to promote conservation and prevent forest fires. Headquartered at Lake George, it runs two lodges; works with corporations to sponsor programs such as winter festivals, bicycle tours and National Trails Day (June 3); and hosts workshops on topics such as backcountry cooking, snowshoeing and map and compass fundamentals.

Non-members are more than welcome to participate in a few outings before joining, says Chris Cring, who is a chapter board member and frequent excursion leader. What they are likely to find, he says, is a collegial group that soon “feels like family” and who often share lunches together after hikes.

The Mid-Hudson ADK calendar includes bi-monthly, seasonal kayak paddles with beach put-ins; dog-plus-person hikes in Harriman State Park; and frequent “How to Get Started Kayaking” presentations. Even a weekend in the dead of winter usually includes a few scheduled hikes in Fahnestock or James Baird state parks. The club classifies each outing by the level of difficulty and distance and/or time required and provides the leader’s name and contact information, along with suggested equipment.

This hike offers beautiful views of both the Hudson River and Fishkill Creek estuary. We will start at Long Dock Park and follow two trails to Madam Brett Park to enjoy both the estuary and Fishkill Falls. We will then circle to the Beacon Institute before entering Denning’s Point. Bring your camera, lunch and two quarts of water. Meet by the kayak pavilion in Long Dock Park at 9 a.m. Confirm with leader.

We will see some of the many dams and lodges beavers have built along the waterways. On last year’s ADK hike we encountered downed trees with fresh beaver bite marks and shavings from earlier that day. Email leader for meeting place, time and directions.

We will hike on the Appalachian Trail and Blue Trail in Fahnestock from Route 301. Find details at nynjtc.org. Contact leader for meeting time, place and carpool directions.

Establishing a level of difficulty can be highly subjective, Cring notes, and he encourages participants to contact the leader to discuss specifics. “Safety is at the forefront of everything,” he says. Leaders must complete ADK training and have some level of wilderness certification.

Cring, who is certified by the state Department of Environmental Conservation as a hiking guide, specializes in historical walks that attract both children and older people who may not be able to complete the more difficult treks. 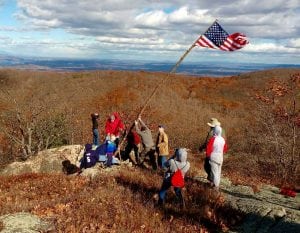 A history buff who loves the outdoors, Cring uses primary sources to design and illustrate his routes. He has led a number of hikes tied to Veterans’ Day and Memorial Day, the latter being more difficult as the group hikes to the U.S. flag located along the Beacon Fishkill ridge. The flag has been maintained for two decades by the family of Robert Darcy, a veteran who died in 1994. It flies high at a clearing with a spectacular view overlooking the Hudson Valley. This mountain range happens to be where patriots maintained a lookout to protect George Washington’s headquarters in Newburgh.

In a different vein, Cring has also led walking tours to the eight places in Beacon associated with the 1994 Paul Newman film Nobody’s Fool. The entertaining excursion — which Cring says he designed to “get people out in winter” — begins and ends at the Yankee Clipper Diner, which was featured in the film.

Cring’s other hikes include one to Anthony’s Nose and a popular one that relates Alexander Hamilton’s time in and around Beacon. For that walk, which he has led eight times, Cring says he dug into more than 22,000 documents, including journals, wills, diary entries, government records. He brings along some of his finds to read aloud at relevant stops along the way. “You get a whole different feeling for history that way,” he says.

One thought on “Exploring – and Saving – the Outdoors”