Putnam County’s top law-enforcement officials joined rehab experts, educators and an audience of about 50 people on March 28 at the Garrison School to discuss the parameters of a drug crisis that claimed three Garrison graduates over 18 months in 2014 and 2015 and a fourth more recently. There have been more than 40 unintentional overdose deaths in Putnam County since 2014.

The forum, organized by the Garrison school board, concluded with comments from the floor. These included impassioned remarks by Nancy Montgomery, a Philipstown Town Board member who lost her nephew to heroin two years ago, who called for more county treatment facilities. Another attendee, Heidi Snyder, the owner of Drug World, promised that its stores in Cold Spring and elsewhere would soon stock Narcan, an opioid antidote.

“As we all know, few communities have felt the pain of the opioid scourge in as concentrated a fashion as we have,” said School Board President Raymond O’Rourke. “Our tiny school perhaps more than any other in the state has counted the cost of the epidemic in the lives of recent graduates. This meeting grew out of our collective shock and sadness over these losses.”

Those graduates include Anthony Yannitelli, who died of an overdose at age 23 in 2015 and whose mother, Mary Ellen Yannitelli, Montgomery’s sister, told the group: “My son is one of the statistics referred to tonight.”

Calling opioid abuse “the issue of our time,” Putnam County Sheriff Donald Smith linked local drug problems to the defense of the nation. The drug trade involves organized crime and is “a matter of national security,” he said. “I’m concerned about international terrorism and international cartels. They’re destroying America from within and bringing this poison into our communities.”

Michael Piazza, Putnam County commissioner of mental health, social services and the Youth Bureau, and Garrison guidance counselor Michael Williams both noted that addiction defies stereotypes so that children who’ve been mistreated may shun drugs, while some who seemingly have everything going for them become addicts. “No one can tell how things are going to turn out,” Piazza said. 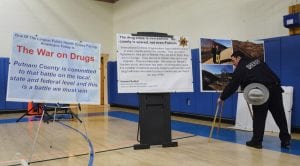 A deputy from the Putnam County Sheriff’s Department sets up posters to accompany remarks by Sheriff Donald Smith at an roundtable at the Garrison School. (Photo by L.S. Armstrong)

The panelists attributed the opioid crisis in large part to the proliferation, starting in the late 1990s, of prescription painkillers. Children typically steal pills from family medicine cabinets and share them with friends.

“The pills are the gateway drug” that leads to addiction, Gerber said. Williams noted that even grade-school students “know where to get them and who’s doing it.”

Gerber also argued that medicating children to boost attentiveness or for similar reasons can teach them “at a very early age that drugs take care of stuff; that drugs work.”

He said the controversial idea that marijuana is a gateway drug that can lead to opiate addiction overlooks the larger concern, which is “just how dangerous marijuana is all by itself.” In the 1960s, marijuana had a level of THC, which accounts for the high, of 5 percent; today marijuana has THC levels of 90 percent, and is mostly scentless and easier to conceal, even at school, he said.

Michelle Stringham, director of outreach at the Walter Hoving Home in Garrison, which assists women, said she believed marijuana led to her own past addiction.

“I don’t think arrests are going to enable us to get our arms around this problem,” he said. “We’re doing so much, trying so hard, doing so well [with arrests and convictions], and the problem is getting worse.”

He noted that Putnam is 16th among New York’s 62 counties in per-capita opioid overdose deaths. More than 300,000 Americans died from overdoses in the last seven years, he said. “That’s insane; insane. I don’t have the answer. I really don’t.” He added: “When a kid gets high, it’s a relief from something, it’s gratification, it’s a mental stimulus, and they’re going to do it again.” He urged adults to help “fill their minds with something other than booze and drugs. If we don’t do that, this is just another one of a million meetings that’s gone on for the last 20 years.”

Smith said tools are available, including his department’s anonymous phone line to report suspected drug activity — “every one of those calls is followed up” — and prescription drug disposal boxes such as one installed in Philipstown Town Hall.

The panelists agreed that Narcan, an opioid antidote that can be administered to revive someone who has overdosed, is a crucial tool that saves lives.

Yet, the drug “is a double-edged sword,” Gerber said. He cited instances of addicts being revived twice in the same day and reports of “Narcan parties,” in which addicts purposefully overdose, knowing they can be saved.

Tendy said some abusers boast of multiple Narcan rescues. “When you get that screwed up, it’s almost a sick game you’re playing,” he said.

Snyder, of Drug World, said she wants her stores to offer Narcan for customers who have addicts in their families to keep on hand. “We are your neighbors,” she said. “I wanted to give you some solutions and not just more problems.” New York allows pharmacists to request permission from the state to provide Narcan, also known as naloxone, without a prescription.

Montgomery criticized the county for downplaying federal initiatives that offer funding to combat high-intensity drug-traffic areas. (The Putnam County Democratic Committee has likewise accused Odell, a Republican, of having “minimized federal assistance received from Democratic lawmakers for combating the heroin crisis.”) Montgomery called for more drug-treatment facilities with beds for overnight stays for adolescents, an approach adopted by Dutchess County.

“We’re here because our kids are in the ground and we want to know what you’re going to do next,” she told the county officials.