In 1964, at age 42, Sam Bartman began to paint. He had been inspired after driving his 10-year-old daughter and her friends to art classes.

Nearly every evening from 7 to 9 p.m., he headed downstairs in his childhood home in Queens. He used standard brushes and paints but also unorthodox instruments such as a turkey baster or other items swiped from the kitchen, and maybe a few chemicals.

His canvases were 17-inch-by-17-inch U.S. Army surplus plastic sheets made by Minnesota Mining and Manufacturing Company (later 3M) that he bought on the street. Bartman rested five or six on a ping-pong table and, experimenting with colors and applications, layered on the paint. He frequently worked on multiple paintings at once and always took scrupulous notes on the alchemy of each work.

On April 7, at Gallery 66 NY in Cold Spring, Bartman, now 95, attended the opening of the first exhibit of his work, titled It’s About Time after his response when told he would have a solo show. It continues through April 30. 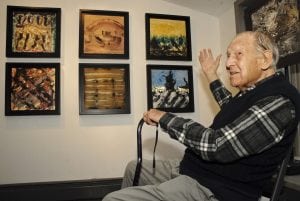 Sam Bartman, seated by a selection of his paintings, explains his technique. (Photo by Howard Goodman)

Bartman says he became devoted to painting because it let him experiment. “I took some paint, put it to it, saw that the material could be bent without cracking, then bought a batch of it and started to really work with it,” he recalls. “There was no expectation of what the outcome was going to be. Experimenting with different materials and processes I could see what the products could throw back at me.”

Lisa Breznak, who curated It’s About Time, notes that Bartman refers to his process as “self-assisted paintings” because, after he mixed medium and material, “the layers would move as they dried overnight, creating different effects. Mixing resins, varnishes, automotive paints and artist oils with water-based materials, he practiced a visual and technical alchemy with his ‘special sauce’ that enhanced drying and made reproducible chemical reactions that aided and abetted his visual experiments.”

Breznak, who is a decorative artist, was introduced to Bartman in November when he attended an exhibit of her work at bau Gallery in Beacon. He showed her photos of his art and she asked to see more. He had 2,000. “When I began going through boxes of his work, I became so excited and realized it should be a retrospective,” she says. “The front gallery is how he perceived and painted landscape over time. The middle gallery presents his abstracts and ways of working with materials and chemicals that flow and create fantasy spaces. The alcove was perfect to show some traditional vintage work from the 1950s and ’60s, and the case holds some studio tools, notes and materials he used to make his more signature work. The back gallery is a collection of works exploring imagery and techniques.” 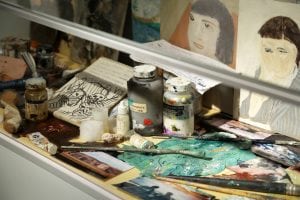 A display case at Gallery 66, chock full of Sam Bartman’s implements, all used in the creation of his paintings. (Photo by Howard Goodman)

Bartman, who worked on a soda delivery truck and later in manufacturing, says he never thought of selling his paintings. He donated some for fundraisers, and pieces were shown occasionally in group shows. “I never pushed on the art,” he says. He notes that some of the paintings in the show are 30 to 40 years old and still vivid. “The vibrancy of the color mixing has stayed true,” he says.

Bartman is no longer painting; he gave it up two years ago to experiment with digital photography. He is often found in front of a computer, shooting portions of his paintings, blowing them up as abstractions, sometimes using them as backdrops for 3D models and figures. Seventy years ago, during his World War II service, Bartman used a Kodak Brownie he bought for $1 to document his experience. When he returned, he took all the money he had ($300) and bought a Leica, which he still has.

One thought on “Painter Has First Show – at Age 95”