Mother Nature wasn’t kind for the celebration of William Shakespeare Day on April 22. Known locally as WillFest and organized by the Hudson Valley Shakespeare Festival, the annual event marks the anniversary of the bard’s death on April 23, 1616. The weather was a typically Shakespearian mix of light showers and cloudiness, none of which deterred the participants at Cold Spring’s waterfront.

Three actors (James Hesse, Clare Parme and Wolf CR) from HVSF’s spring touring company performed excerpts from Romeo and Juliet, which they and their colleagues are presenting to students in the region in school visits. Eighth graders from the Garrison School previewed The Seussification of Romeo and Juliet, which goes onstage at the school at 7:30 p.m. on Thursday, May 4, after being postponed from April 28. 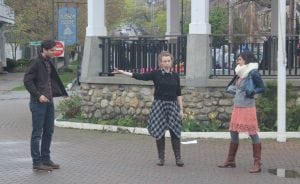 Romeo (James Hesse) and Juliet (Clare Parme) are given a talking to by Nurse (Wolf CR). (Photos by A. Rooney)

Next came six West Point cadets, all winners of what is known as “Academy Idol.” Shakespeare fills a great deal of the first-year English curriculum at the U.S. Military Academy, explained Sean McNall, HVSF’s director of education, and each first-year cadet must learn and perform a monologue. They performed selections from The Tempest, Othello, Julius Caesar and Macbeth. “He gets in his own head,” one cadet said, setting the scene. “This is the first instance of, ‘Wow, Macbeth is really losing it.’ ”

Meanwhile, the HVSF opened its Main Street office for arts and crafts and Story Screen Beacon showed Shakespeare in Love at the old VFW Hall after leading the audience through a trivia quiz with book and DVD prizes. Sample question: “William Shakespeare left most of his possessions to his daughter, but he left one single object to his wife. What was it?” The answer: His “second best bed.” (No one got it.) 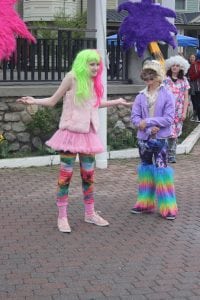 Actors Fallon Barry and a classmate, a/k/a Juliet and Romeo in a preview of The Seussification of Romeo and Juliet (Photo by Alison Rooney)

HVSF set up a costume photo booth at St. Mary’s Parish Hall during the weekly farmers’ market, then gave workshops on theater games; stage combat; and “Shakespeare Showdown,” a Jeopardy-like game hosted by The Middle Company, a new Hudson Valley theater collective. Team Mercutio won after Team Lysander faltered on whether the line “How many nights does it take to count the stars?” was from the bard or a boy band. (Answer: One Direction.)

Finally, the day concluded at the Old VFW Hall with a screening by the Cold Spring Film Society of Orson Welles’ 1965 version of the Falstaff plays, Chimes at Midnight.

2 thoughts on “A Day With the Bard”