Sam Harrell didn’t have a chance when he was surrounded by corrections officers at the medium-security Fishkill Correctional Facility in April 2015. He was handcuffed, beaten and thrown down a staircase.

In the two years since his death, which the coroner ruled to be a homicide, no one has been disciplined. The Dutchess County district attorney, William Grady, was investigating, but apparently has dropped the ball. Alphonso David, counsel to Gov. Andrew Cuomo, has also sat on his hands. 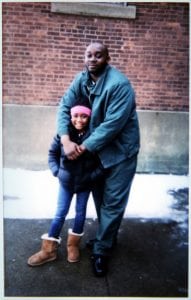 Samuel Harrell with his niece

Harrell, who was 30 and suffering from bipolar disorder, was serving time for a non-violent drug crime. Were he white, the chances are strong he would not have been charged with a crime or imprisoned.

Once he was incarcerated at Fishkill, he was immersed in a perfect storm for exacerbating his mental illness and suffering totally out of proportion to the actions which led to him being sent there. The storm of criminalizing non-violent drug use, severe sentencing, solitary confinement, inadequate psychiatric treatment and devaluing of rehabilitation is perfect for enslaving people who are vulnerable.

Add to this deficient therapy and support for the pressures burdening corrections officers and the tendency for stress to boil over into violence becomes a living hell.

Since Harrell’s death, his wife, sister, father and friends have spoken eloquently, ardently and lovingly about him and given him the dignity he could not receive during his tortured last weeks of life. But, the storm which destroyed Harrell has been and still is being passed on to generations, even to those with strong family support.

With no action being taken by the Department of Corrections in response to this tragedy, it makes the violent killing of a prisoner by the hands of state employees appear normal.

Beacon Prison Action organized a vigil in April to mark the second anniversary of Harrell’s death. As Beacon benefits economically from Fishkill Correctional Facility, our responsibility as a community extends to the prisoners in our midst. The prison property where this tragedy occurred is part of our community — it abuts the playing fields of Beacon High School.

There is compelling need to hear the voices of D.A. Grady, Alphonso David and Robert Cunningham, superintendent of the Fishkill Correctional Facility, on the matter of justice for Sam Harrell.

One thought on “Letter: What Has Changed?”