Before they could open their new Cold Spring business, James Caroll and Richard Corio needed two licenses — one to serve beer, and one to cut hair.

They got both, and after 18 months of renovations, the front half of their Barber and Brew at 69 Main St. has vintage chairs, while the bar in the back serves 10 draught beers, wine and light food. 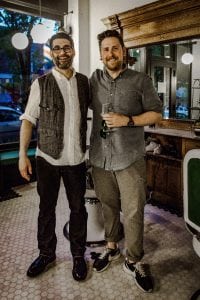 The chairs are what you see first, positioned in front of a built-in wall set that dates from the space’s previous tonsorial incarnation during the 1940s. (During the 1970s, it was known as Gus’.)

The back bar has exposed brick, brass light fixtures, a marble-topped bar and leather seating. The ceilings in both rooms have been stripped of tin and restored to their original wood. 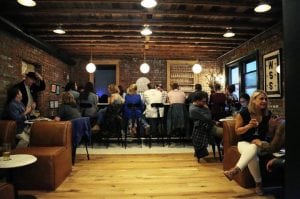 The bar at Barber and Brew (Photo provided)

Caroll, who with his wife, Tara, owns the outdoors gear store Old Souls a few doors down, and hairstylist Corio had the idea for the shears-and-cheers business after Corio rented an apartment over the space. An accomplished stylist who has worked at salons such as Bumble and Bumble, Garran and Sally Hershberger in Manhattan and Tommyguns in Brooklyn, Corio came to Cold Spring when his wife, Liz, accepted a job at the Glynwood Center.

The brew shop is open Wednesday through Friday from 5 to 10 p.m. and Saturday and Sunday from noon to 10 p.m. Tap beers are available in 9- and 16-ounce servings or for take-out via a canning machine. There are also wines from California and New York, Italy and France; three hard ciders and non-alcoholic beverages. The menu includes cheeses from New York and Vermont, pickled vegetable platters, mushroom paté, charcuterie and pork and duck terrine, with most dishes in the $10 to $12 range. There is also the occasional raw bar.

Corio commuted to the city for 18 months while trying to figure out a way not to commute. When the former barbershop below them became available after The Highlands Current moved to 161 Main St., the prospect of living and working in the same building was enticing. And when the landlord expressed interest in selling the building, “it felt like fate,” Corio said.

But there was too much space for just a barbershop, so he approached Caroll, who had become a friend, about sharing the space with another new business, such as a store that sold fishing gear or “man-cave” supplies. 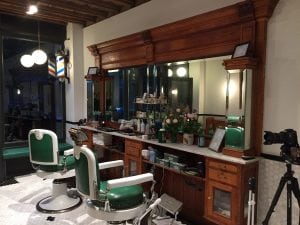 The built-in wall set dates from at least the 1940s. (Photo by Michele Gedney)

Once the partners settled on a bar, Caroll (who runs a city business that restores wood floors and ceilings) supervised a gut renovation. “A lot had to come out, as it was structurally unsound,” Caroll explains. Scanga Woodworking built the bar; Steve Voloto of SDV Carpentry constructed other elements, and Stock Up’s Chris Pascarella connected them to beer suppliers. The partners found a barbershop pole at an antique store on Route 9. 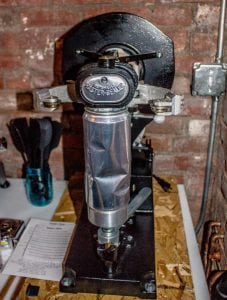 Since Barber and Brew opened on May 18, it has been so busy the partners have extended its hours. “We’ve been doing [salon] bookings with extra time built into them, so that if someone stops in for a beer, I’ll do my best to get them in for a haircut, too,” Corio explains, adding that he has tried to keep prices reasonable. “We want to be adding to the town, not changing it,” he says. “We want this to be a community hangout.”

Liz Corio says she has enjoyed seeing “a service business storefront back on Main Street. Hopefully there’ll be more of them. It’s the next level of local.”

One thought on “Shears and Cheers”