Some Highlands students have familiar teachers – their parents

A few years back, whenever a towering stack of books hit the busy front desk at Cold Spring’s Butterfield Library, employees knew Ezra Hubbard was behind it.

Much taller now at age 13, Ezra’s always been a hungry reader. Yet he has never attended a traditional school.

Ezra learns at home in Beacon with his mother, educator and performing artist Twinkle Burke, and his dad, baritone sax player Brad Hubbard. His instruction includes music, math, English Language Arts, science and social studies. Then the teen steps out to learn physical science at a friend’s house, or chemistry at Homeschoolers-on-the-Hudson, which meets in Poughkeepsie. For physical education, Ezra rides his bike, plays touch football, swims and jumps on a friend’s trampoline. He also takes a Native American Outdoor Survival course. Since age 6, he’s been in an architecture class, too.

The subject mix changes, but the intensity of learning does not. 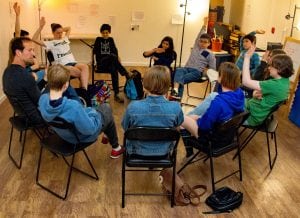 A philosophy class for homeschooled students taught by Dan Fisherman, left, at Compass Arts in Beacon (Photo by Anita Peltonen)

Parents homeschool their children for practical and philosophical reasons. They may be involved in the performing arts, or move around often because of military assignments. Children with certain disabilities may find it easier to be educated at home. Some families have deep religious beliefs. Or, parents may not like the teacher-to-student ratio, standardized testing, bullying or lack of diversity in schools.

“Beacon is diverse, but not integrated,” says Burke.

The Burke-Hubbards are a mixed-race family. Burke says they didn’t want Ezra segregated by age, socioeconomics or skin color.

In Cold Spring, Sakura Ozaki wanted to homeschool her two daughters through elementary school to maintain a close bond with them, she says. She and her husband, Paul Kottman, also wanted to provide multilingual education.

Helena builds chemistry models and learns biology, math and history at a kitchen table framed by books, games and plants. She will enroll in sixth grade next year at Manitou School. Sophia enrolled in seventh grade at Haldane Middle School last year, and became an honor student.

Many homeschooling parents in the Highlands rely on teaching and learning cooperatives. Some split teaching duties among five parents over five days, says Gail Morgan, the Beacon school district’s registrar. 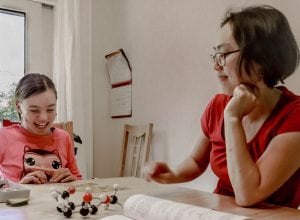 Sakura Ozaki homeschooling her daughter Helena, 11, at the kitchen table (Photo by A. Peltonen)

Most parents who homeschool say they emphasize integration rather than separation of topics. For instance, a trip to the Metropolitan Museum may cover archaeology, architecture, arms and art. Local libraries have free museum passes, and books can be retrieved on almost any topic through interlibrary loan.

Through Rivertown Homeschool Hub, students ages 10 to 18 can take a weekly philosophy class at Compass Arts in Beacon. One recent Wednesday, Dan Fisherman led 10 kids through a thicket of debate about whether more than one person should be arrested for a “heinous crime,” even if only one person held the gun.

Burke believes homeschoolers are better socialized than the typical classroom student, because they interact closely with people of all ages, not just kids in the same grade. They aren’t cloistered mini-adults, she adds; a homeschooled teen is still a teen.

A growing number of homeschooled students are leaving the dining room table to join small multitudes of others to go rock-climbing, scouting, and even hold proms. Because there are an estimated 2 million homeschooled students in the U.S., there is a rich market in teaching aids. Ezra Hubbard takes online courses offered by a community college and will be joining Rivertown Homeschool Hub.

“We buy curricula for our students as a group,” explains his mother, who administers the support group Homeschool New York, and they help each other meet what she calls “stringent” state regulations.

School attendance became compulsory in every state nearly 100 years ago. Some give homeschooler parents nearly unfettered authority, but New York has one of the most closely regulated systems.

New York parents who want to apply to homeschool children ages 6 to 16 must file a Notice of Intention to Instruct at Home with their public school district by July 1, with some leeway for families that move.

Ozaki says her daughters never asked to go to public school. “I tried to make it fun,” she says. “That was our biggest goal, to create a love of learning before getting into the drilling and content testing in the public schools.”

Ezra is looking ahead to college. He talked for a while about SUNY New Paltz but after seeing the Michael Moore documentary, Where to Invade Next?, he became curious about (free) college in Slovenia.

Burke says she dares not predict what route he’ll take.