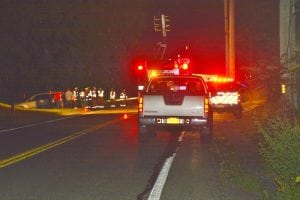 First responders at a collision on June 22 on Route 9D (Photo by L.S. Armstrong)

The collision, which took place about 10:35 p.m., apparently involved a motorcycle and car. The site is near the Y-shaped intersection where Route 9D meets the extension of Fair Street, not far from Little Stony Point.

Traffic continued to flow slowly past the scene while onlookers gathered and emergency services went about their work. It was not immediately clear if anyone sustained serious injuries, but an ambulance stood ready.