Uber and Lyft arrived in the Highlands at 12:01 a.m. on Thursday, June 29, following a change in state law that allows ride-hailing services to operate outside New York City. But the law also allows counties to ban them.

Through a phone app, ride-hailing services connect passengers with drivers using their private cars. Uber and Lyft face less regulation than taxi companies, primarily because the services are considered “prearranged” rides while taxis can legally stop for fares who flag them down.

Under the law, the Department of Motor Vehicles will regulate ride-hailing drivers (and the state will collect a 4 percent “assessment fee” on every ride-hailing trip while prohibiting counties and towns from collecting sales tax). The plan did not go over well with Westchester County, which has its own commission to oversee taxis and limousines, or Putnam County, which does not but where legislators heard complaints that Uber and Lyft create unfair competition.

In Westchester, the legislature considered opting out of ride-hailing rules established by the DMV, saying it wanted to create its own, stricter regulations. It held a public hearing on June 28 but ultimately decided not to opt out. Instead, it will provide decals for ride-hailing drivers who voluntarily pay $90 to be fingerprinted. Legislators in Putnam discussed their options on June 22.

For Uber economy service in the Highlands on June 29 from town centers. The base fare is $2.55, plus 35 cents per minute and $1.75 per mile. The minimum fare is $8. Uber takes about 20 percent of each fare in commission.

Taxi companies in Philipstown have pushed for authorities to hold Uber and Lyft drivers to the same standards as those who drive cabs. Carmel Taxi, which runs Village Taxi in Cold Spring, operates under a license from the Westchester Taxi and Limousine Commission, which requires drivers to be fingerprinted for background checks and conducts drug testing. 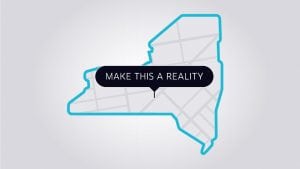 Uber spent more than $750,000 on lobbyists in Albany during the first half of 2016 to push for ride-hailing services to be legalized across the state, according to a report by the Joint Commission of Public Ethics. This image was part of its campaign.

“As a taxi company, we have a lot of expenses,” Ruth Ayala-Quezada of Carmel Taxi told Putnam legislators on June 22. “We are not going to be able to compete with Uber prices because they don’t have the same requirements. We want to make sure we have fair competition.”

Eric Maas, who drives for Alley’s Way Car Service in Philipstown, proposed the county require Uber and Lyft to pay a fee that would be used to compensate taxi and limousine services. “That would be a great barrier, a great cure,” he told legislators. In remarks to The Current, he described the approval of ride-hailing upstate as “a joke,” attributing it to “money talking” after intense lobbying by Uber and Lyft. Those efforts included a “Because Upstate Matters” campaign by Uber that cited opposition by “special interests” in Albany.

Joseph Castellano, the county legislator who represents Brewster, which has its own taxi commission, leaned toward opting out, noting that while “all of New York State — upstate especially — really wants Uber and Lyft because of a lack of taxicabs, Putnam County, I think, is sort of unique. We have a lot of taxicab companies that operate here.”

In 2013 the Putnam County Transportation Advisory Committee, chaired by Vincent Tamagna, recommended the county ask the state for permission to create a taxi commission, but municipalities such as Brewster, Kent, Southeast and Patterson, resisted. By contrast, Cold Spring backed the idea. 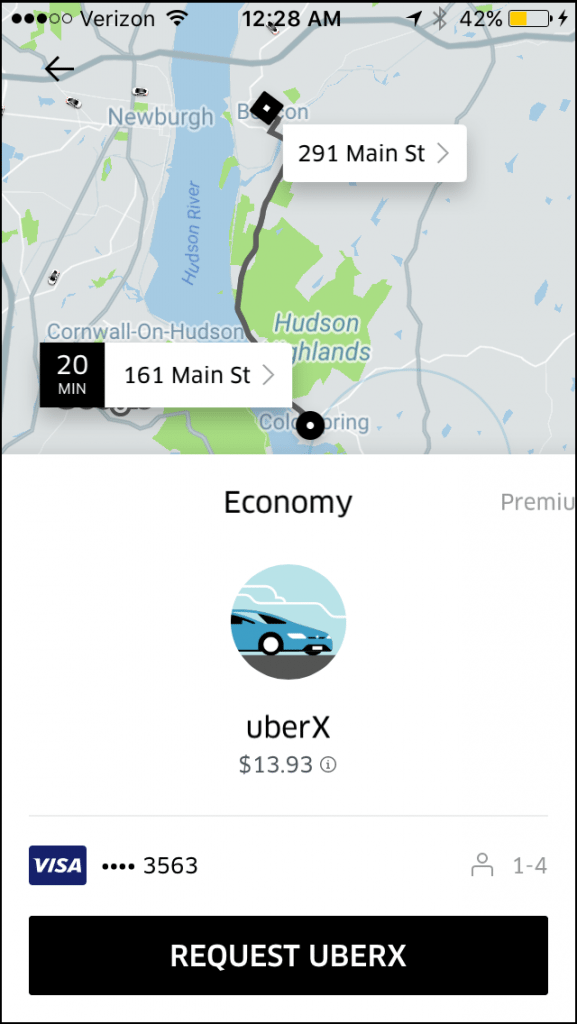 A screen shot from the Uber app

At the June 22 meeting, Barbara Scuccimarra (R-Philipstown) asked her colleagues to consider the needs of residents on the western side of the county, where there are fewer taxi services, before quashing ride-hailing.

“For a person to say to a taxi, ‘Come over to this side of the county,’ is like $70,” she said. “Uber would be a lot more reasonable for them to be able to get around the county when they don’t have the accessibility to buses as we do over here” in Carmel. She also said she “would like to hear Uber’s side” of the debate.

The new DMV regulations require ride-hailing drivers to be at least 19 years old, pass a criminal background check and have a clean driving record. (Uber and Lyft currently require its drivers to be at least 21, and the companies conduct their own background checks.) On June 29, Gov. Andrew Cuomo signed into law a bill co-sponsored by state Sen. Sue Serino, who represents Philipstown and Beacon, that prohibits Level 1 sex offenders from becoming ride-hailing drivers. Level 2 and 3 offenders are already banned. 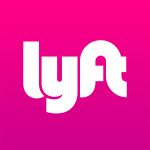 Upstate New York is one of the last places in the continental U.S. to hold out against ride-hailing, although many upstate officials argue it will provide jobs and better transportation options for rural areas, as well as cut down on drunk driving.

“Upstate cities are undergoing a revitalization but that can’t continue unless we have the most basic services that nearly every other city in the U.S. enjoys,” read a letter sent in December to the governor signed by, among others, Dutchess County Executive Marc Molinaro. “When visitors arrive in Albany, Buffalo, Syracuse, Rochester, Utica and other cities, they are simply stunned when they open up their Uber app and see that they can’t get a ride here.”

After hearing complaints from cabbies, Beacon police have ticketed drivers, often from Newburgh, at the Metro-North station who do not have medallions issued by the city or taxicab operator licenses issued by the police department. Brewster cabbies on June 22 complained to legislators about ride-hailing drivers from Connecticut who picked up fares at the train station there.