Magazzino Italian Art, the long-gestating art space that holds by far the largest collection of Arte Povera (“poor art”) outside of Italy, opened with a grand party on June 28, following a press preview four days earlier. Its founders and patrons are Nancy Olnick and Giorgio Spanu of Garrison. 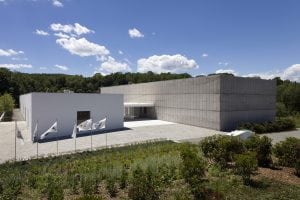 The Magazzino building, although visible from Route 9 just south of the intersection of Route 301, feels far removed from that busy artery.  Spanish architect Miguel Quismondo worked from the original structure, a warehouse (magazzino) that had once been a dairy distribution center and more recently the Cyberchron computer factory. He kept the factory-high ceilings, their beams now covered with white paint, but otherwise rendered the space unrecognizable.

The building has 20,000 square feet, which includes nearly 18,000 to display artwork, and a 5,000-volume library, the latter to be ready in January. The original L-shaped footprint has been altered into a rectangle with the addition of a second gallery built of concrete and metal girders.  It surrounds a courtyard, while skylights provide natural light and everywhere there are huge glass windows, affording immersive views of the landscaping. 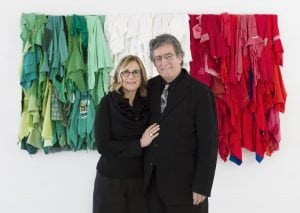 Arte Povera was the term given in the late 1960s to a Turin-based movement of artists opposed to the commercialization of art and industrialization. Working with everyday, mundane materials — including, surprisingly, neon created with the abundant reserves of lead found in that area —  the artists largely created sculpture and installations, repurposing industrial materials. Their often large-scale works require the ample space that Magazzino has provided.

One side of the complex will mostly hold pieces from the permanent collection, while the other will host biannual exhibitions starting in March related to post-war and contemporary Italian art. The inaugural show highlights the collection of gallery owner Margherita Stein and includes about 70 works of artists she fostered. 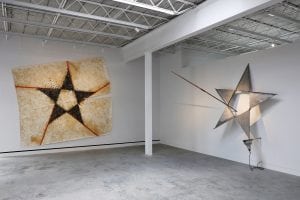 The permanent collection includes not just Arte Povera but a selection of works by artists in the generation that followed. They are arranged to provoke thought and questions about each artist’s intention, explains Magazzino Director Vittorio Calabrese, an Italian who has relocated to Beacon. The works are arranged loosely by themes, particularly duality, identity and time. Some are minimalist and centered on the materials while others draw from literature, myth, theater and Italian heritage.

“It’s a dialogue, a conversation,” he says. “Arte Povera is like an umbrella, but we are going beyond and highlighting the individual process.  We want the viewer to have an emotional, personal response, not an academic one.” 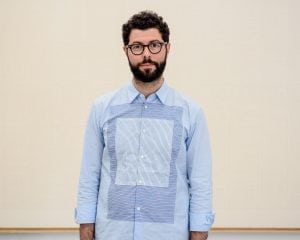 Vittorio Calabrese, director of Magazzino and a new Beacon resident, at the June 28 opening (Photo by Zach Hilty/BFA)

To reinforce that goal, there are no wall plaques. Instead, visitors are given a pamphlet designed to be read after seeing the art. Although tours will be offered from time to time, most visitors are encouraged to browse at their own pace.

Calabrese says Arte Povera was Italy’s last avant-garde group movement. “The generation after that rejected it, but now there is a third generation, which has become interested again,” he says. “Their work is less conceptual, more experimental.”

A view of one gallery with works by Luciano Fabro, Alighiero Boetti, Michelangelo Pistoletto and Mario Merz (Photo by Marco Anelli)

Magazzino intends to support projects by emerging artists in Italy and the U.S. and recently sponsored a project by Beacon-based Melissa McGill, The Campi, a sculptural sound project relating to Venetian squares.

The creation of the art space, from construction to installation, was captured by photographer Marco Anelli, whose book, Building Magazzino, will be published in October by Rizzoli.

Located at 2700 Route 9, Magazzino is open by appointment. To reserve a two-hour visit, see magazzino.art/booking.