Brewer and Riverkeeper team up for Ship Rocked IPA

Lots of Hudson Valley craft brewers are making IPAs these days, but only one brewer is doing it on a boat.

The Mill House Brewing Company in Poughkeepsie teamed up with the environmental organization Riverkeeper to brew 22 gallons of Ship Rocked IPA using 17th-century methods to call attention to a 21st-century problem: the need to protect sources of drinking water such as the Hudson.

As Mill House’s Jamie Bishop explained while tapping a keg aboard the Evening Star — a boat owned by Trinity Cruise Company — the India Pale Ale (IPA) style wasn’t invented by brewers trying to be hip or trendy. They were trying to keep people alive. 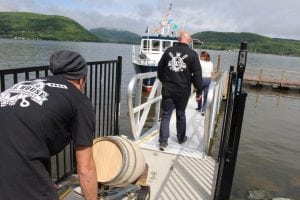 In the 1600s, the East India Trade Company sent ships from England to the Far East. Because drinking water stored on board would absorb the salty sea air over the months-long trips and turn brackish, the company loaded barrels of hoppy beer. The hops acted as a preservative, and the rocking motion mixed the beer and deepened its flavor.

For Bishop, who grew up in Poughkeepsie and spent a lot of time playing and fishing in the river, the idea of brewing a beer using the rocking of a boat sounded like too much fun not to try. At a symposium of small business owners who rely on the Hudson (Poughkeepsie is one of the seven municipalities that use it for drinking water), Bishop mentioned the idea to Dan Shapley, Riverkeeper’s water quality program director.

“I thought, well, I know somebody with a boat,” Shapley recalled. 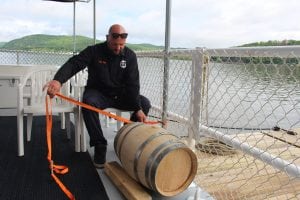 Mill House brewed four barrels of the IPA at their Poughkeepsie facility and stored them aboard the Evening Star for 16 days as the ship went about its normal routes. After periodic sampling, Bishop declared the beer fit to drink and the Evening Star filled its decks with brewers, reporters, environmentalists and politicians for a sunset tasting cruise.

The excursion was fun but also carried an important message, Shapley said. More than 100,000 people rely on the Hudson for drinking water, which is one of the reasons that protecting it is so important. “Most of you in the Hudson Highlands get your drinking water from reservoirs up in the mountains that are surrounded by protected forests,” he said. “Not everyone is so lucky.”

Like all Mill House beers, Ship Rocked IPA is brewed with Hudson River water. Bishop noted that many beer styles came about as a result of the specific characteristics of nearby rivers. The pristine rivers of the Czech Republic gave birth to pilsner, for example, whereas the mineral rich waters of Ireland are responsible for stouts. 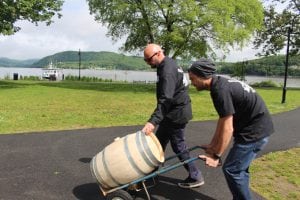 The Hudson sports a clean and light flavor profile since it’s fed mostly from storm runoff, which is one of the reason that Matthew Vassar built what was, at the time, one of the nation’s largest breweries in Poughkeepsie more than 100 years ago. “Other brewers would kill to brew with this water,” Bishop said. Since the Hudson’s waters are relatively mineral free, it allows Mill House to build whatever flavor profile they want.

“It would be too expensive if we had to take things out of the water, and it creates a lot of waste,” he said. 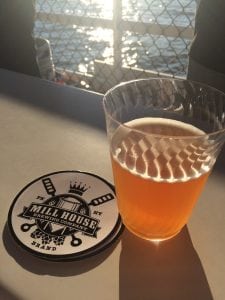 Bishop admitted he was worried how the beer would turn out. The weather in the Hudson Valley over the past month has seen temperature swings between 40 and 96 degrees. But turning over the final steps of the brewing process to Mother Nature was part of the fun.

He needn’t have worried. To this reviewer, the brew was crisp, only mildly hoppy with delicate citrus notes and a pleasant caramel finish, as opposed to the often overwhelming flavors of other craft IPAs.

Although the inaugural batch of Ship Rocked IPA has been consumed, Bishop said he’d like to brew 40 barrels next year. “I just need somebody with a bigger boat.”

One thought on “Beer by the Hudson”