Enjoy an invigorating walk in the woods, followed by a nap on a cozy cushion, and some one-on-one time with the host? Shepherd and Grey can provide it — but only for your dog.

Situated in a modern home adjacent to nearly an acre of open field, the new boarding and daycare service off Route 9 in Philipstown is run by John Heinz, who formerly operated a similar business in a high-rise apartment in Jersey City. 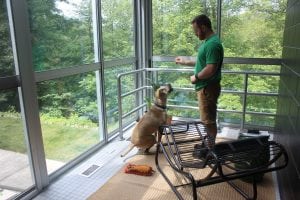 The many floor-to-ceiling windows allow dogs to keep track of goings-on outside. John Heinz offers a treat to an eager recipient. (Photo by A. Rooney)

Shepherd and Grey takes only four dogs at a time overnight, and five for day visits. It also boards birds, but no cats — mostly because of the birds. Heinz shares the home with his partner, Lav Lotrean, who works in the financial district. The business is named for their two pets, an 8-year-old German Shepherd mix and a 26-year-old African Grey parrot.

“Our aim is to replicate the home environment,” Heinz explains, noting that when there are dogs in residence in the guest area, he sleeps on a bed in that room. If the dogs want to sleep on the bed with him and their owners say it’s OK, they certainly can. 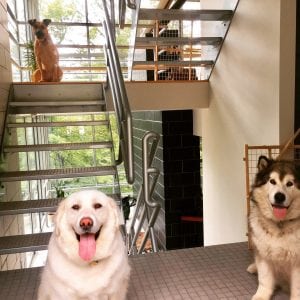 Multiple levels of Shepherd and Grey’s home allow for as much separation or togetherness as needed. (Photo provided)

Although there are several 4-by-6-foot kennels, they have yet to be used and would be only at the owner’s instruction or with a dog who doesn’t socialize well, Heinz says. As the property is not fenced, dogs can be led in daily pack walks using long leads or be placed on a supervised 75-foot cable run.

Heinz had a busy professional life before switching gears to the canine realm. After earning a degree from New York University in psychology, he became a magazine and book editor for companies such as Hyperion and Random House. In the early 2000s he moved to Miami to work for publications such as Niche, Gotham and Ocean Drive. But he felt dissatisfied and began thinking about how he could make a living doing something related to dogs.

“I come from a family of dog lovers and came to realize that dogs should become my primary focus,” he says. 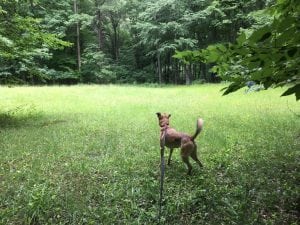 A nearby field is explored by Shepherd and Grey several times a day. (Photo provided)

Eager to move “to the country” from New Jersey, Heinz and Lotrean settled on Philipstown and purchased their Richard Meier-inspired home, built in the early 1990s, that offers its canine guests several floors of floor-to-ceiling glass panes. The levels can be blocked off with removable gates, allowing for as much dog-to-dog interaction as works best.

For day visits, the hours are 7 a.m. to 8 p.m. for $35, or $20 for up to six hours. Overnight boarding is $45 for dogs and $20 for birds. Rates are slightly higher over the holidays. Owners supply food, and medicines can be dispensed. Each stay includes photo and video updates sent by text or e-mail. Heinz also offers pick-up and drop off. Call 845-642-0002 or visit shepherdandgrey.com.