The Putnam County Sheriff’s Department dedicated a new patrol motorcycle to the memory of Mark Gilmore, a senior investigator in charge of the Narcotics Enforcement Unit who died in March at age 54 after suffering a heart attack while off-duty. Gilmore also served as a motorcycle officer during his 28-year career with the sheriff’s office. 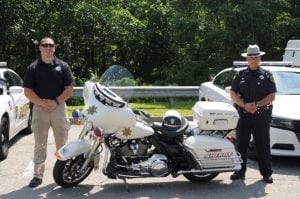 Deputies William Verrastro and Anthony Tolve are shown with a motorcycle dedicated to the memory of Senior Investigator Mark Gilmore. (Photo provided)

The 2017 Harley Davidson Police FLHTP Electra Glide has “RIP Sr. Inv. Mark Gilmore” on its sides and “92,” his badge number, on its back. It will be used for patrols, motorcade escorts and parades.

It was unveiled on July 22 at a fundraising barbecue held to benefit Gilmore’s widow, Amy, and his daughter, Mattingly, as well as Deputy Sheriff Michael Schmidt, who is battling cancer.