The first day of August dawned a beautiful summer day, so I ventured north to explore Lake Taghkanic State Park, less than 60 miles from the Highlands.

The drive up the Taconic State Parkway was quite relaxing, especially compared to the white-knuckle southbound commute. During my hour-long jaunt, there were seldom any cars ahead of me and just as few in my mirror. 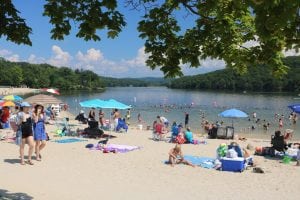 At 1,569 acres, Lake Taghkanic State Park is expansive and varied enough to make it the focus of a day trip. A clean, sandy beach fronts the 1.5-mile-long lake. It’s well-maintained and has a lifeguard on duty. It also has a modern snack bar (burgers $4, hot dogs $3, veggie burgers $6) and changing rooms.

Within sight of the beach, visitors can rent rowboats, kayaks, paddleboats and canoes. For those who bring their own, there is a boat launch available. When I pulled into the beach area at about 2 p.m. — albeit on a weekday — the parking lot was at most 10 percent full.

The park has numerous picnic areas with shade under mature trees. Some spots overlook the lake and a nearby playground was pretty elaborate. 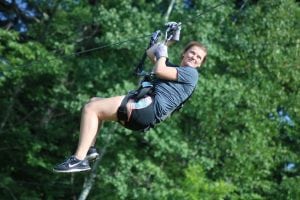 The 4-mile Lakeview Trail circles the 168-acre lake, a relatively easy walk that includes plenty of flora and fauna and views. At a relaxed pace it can be completed in two-and-a-half hours. A gentle, looping, grass-covered fitness trail can be traversed in about 30 minutes.

The Winter Trail, at less than a half mile, is rugged. It is used mainly by snowmobilers and has the steepest and highest climb at 170 feet. The Campground Loop heads into the wooded, undeveloped portion of the park.

The park also accommodates long-term stays with one- to four-bedroom cabins and full-service cottages. Summer rentals are by the week and spring and fall by the day. The park also has more than 60 campsites. For more info, see parks.ny.gov.

If you want to roam, southern Columbia County offers a number of nooks and crannies. Leave early, heading north on the Taconic with coffee or tea in hand, but hold off on breakfast until you reach Route 82 and the West Taghkanic Diner. It’s a classic, with the mandatory extensive menu, rotating red counter stools, tight booths and an atmosphere that will transport you back decades. It’s about 10 minutes from the park. 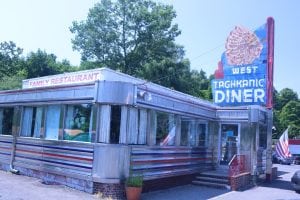 Want some excitement after breakfast? Take Route 23 east from the diner for about 15 miles. After passing through the village of Hillsdale you’ll reach Catamount Aerial Adventure Park. The winter ski hill morphs into zip line central in the summer with 12 self-guided, wooded courses at five skill levels. Depending on the degree of difficulty, the runs are solo or supervised. Children as young as age 7 can join in. There are more than 50 lines, including two parallel 2,000-foot runs.

The Hillrock Estate Distillery is 10 minutes from the park, near the village of Ancram. The setting is truly beautiful with an 1806 Georgian farmhouse that overlooks barley fields and the distant Berkshires. The distillery boasts the “world’s first solera-aged bourbon,” created with a process that periodically replaces small amounts of aged whiskey in the barrels with new whiskey. Tasting tours are $20, refunded with the purchase of a bottle. Walk-ins are welcome, but tours should be booked in advance. See hillrockdistillery.com. 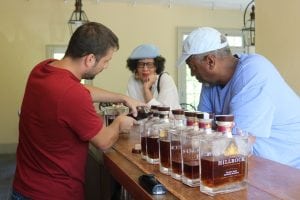 A tasting at the Hill Rock Distillery (Photo by M. Turton)

Rolling hills, beautiful farms, parks, quaint villages and unique eateries abound on the back roads within an easy drive of Taghkanic State Park. Here are 10 suggestions: