It’ll be all Benedict Arnold, all the time, during the Week of Revolution in Philipstown beginning Sunday, Aug. 27.

The idea came from an HVSF2 reading in 2015 of The General from America, the Richard Nelson play being performed by HVSF under its Boscobel tent. Putnam History Museum Chair Preston Pittman and immediate past Chair Jennifer Mercurio attended and brainstormed with HVSF Managing Director Kate Liberman about how the organizations could team up when the play came to Boscobel in 2017. 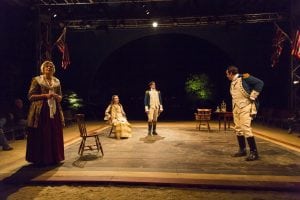 On Aug. 27 at Boscobel hosts a military reenactment from 11 a.m. to 4 p.m. with camps from the Revolutionary period, the War of 1812 and the Civil War. It will include formations, artillery and drills, and Gen. George Washington inspecting his troops. Tickets are $11 for visitors 15 and older, $5 for children and teens ages 6 to 14, and free for those ages 5 and younger. A family package is available for $30.

Also that Sunday (and continuing daily on Wednesday, Aug. 31), from 11 a.m. to 5 p.m., the museum hosts its exhibit, Treason! Benedict Arnold in the Hudson Highlands. Members and children ages 12 and younger are admitted free; otherwise, admission is $5 for adults and $2 for seniors, members of the military and students.

Later in the day, at 6:15 p.m., Allison Pataki, a Garrison native, will discuss and answer questions at Boscobel on her bestselling historical novel, The Traitor’s Wife, about Benedict Arnold’s wife, Peggy Shippen. The character also appears in The General from America, which follows the talk at 7:30 p.m. The play also will be performed on Aug. 30, Sept. 1 and Sept. 3. 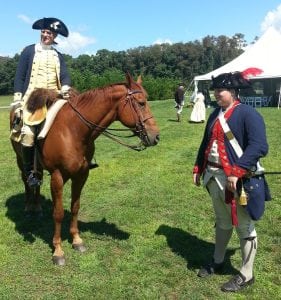 “Local history buffs will think about the history of this area differently after seeing it,” says Liberman. “It’s spectacular to see the actors on stage in that venue, wearing Charlotte Palmer-Lane’s costumes, wigs and boots, and then look up to see West Point in the distance.”

On Monday, Aug. 28, HVSF will host a Community Night under its tent designed to appeal to Hamilton fans. An open-mic sing-a-long to the popular musical’s songs, dubbed Hamiltunes, begins with a 5 p.m. signup. Boscobel, whose builders, the Dyckman family, were Loyalists, will be open for free tours. Registration is required.

Before the Friday, Sept. 1, performance of The General from America, at 6:15 p.m. Richard Nelson will speak about his play. A ticket is not required to attend the free talk, but registration is recommended. After the show, there will be a free trivia night for visitors ages 21 and older that will focus on revolution in history, pop culture and literature. A version of the trivia challenge for teenagers will take place at 5:30 p.m. on Wednesday, Aug. 30. Registration is required for either event. 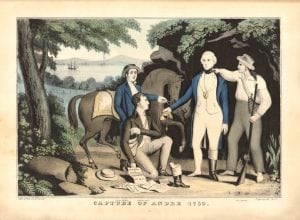 A Currier and Ives depiction of the capture of Maj. John André with the plans for West Point in his boot

On Saturday, Sept. 2, the Putnam History Museum will present a program called A Bite of History looking at Revolutionary era food. It takes place from 2 to 5 p.m. and includes samples and trivia. Registration is recommended.

Also that day, across the river at the West Point Museum, West Point scholars at 1 p.m. will discuss the Revolutionary War and Arnold’s role in it. The event will be followed, at 3 p.m., by a boat tour of Constitution Island that will depart and return to the West Point dock. Registration through HVSF is essential. The association will offer an additional guided boat tour of the island at 3 p.m. from West Point’s south dock on Sunday, Sept. 3.

The galleries at the West Point Museum have hidden treasures for children to use their decoding skills in finding (pick up a postcard at the gift shop). Visitors also can scope out a replica of the Great Chain, a model of the ship Vulture, and weaponry. Admission is free. The West Point Museum is located near the Visitors’ Center prior to the Thayer Gate. It is open daily from 10:30 a.m. to 4:15 p.m. 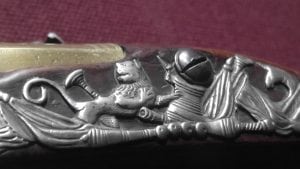 Detail from a pistol owned by George Washington on display at the West Point Museum. (Photo by Emma Corey)

On Thursday, Aug. 31, from 1 to 4 p.m., Boscobel educator Lisa Di Marzo will lead children and a few HVSF performers in Revolutionary War demonstrations, activities and games, including role-playing and fight academies with Ryan Quinn. Registration is suggested.

On Sunday, Sept. 3, at 10 a.m., storyteller Jonathan Kruk will lead a 90-minute, family friendly hike that follows the footsteps of Washington’s men as they chased Arnold. It is sponsored by the Hudson Highlands Land Trust. Children ages 4-7 (no strollers) can search for clues along Arnold’s Flight Trail in Garrison and assist Washington in tracking the elusive turncoat. Meet in the Philipstown Recreation Center parking lot. Registration required.

More details, and links to register, are at hvshakespeare.org.

One thought on “Week of Revolution: Back to the Beginning”