Renovations for a new restaurant and café are well underway at No. 7 Garrison’s Landing, home to the former Guinan’s Pub & Country Store, which closed its doors in 2008. A few weeks ago, I received a private tour, stepping back across a threshold into a place so many lucky people once called a second home.

The nonprofit Garrison’s Landing Association, which is leading the reconstruction, has rebuilt the pub (the floor doesn’t slant anymore) and kept the overall architecture intact. The green phone booth still stands outside (it might become a library book trading outpost) and the stone fireplace is there. I couldn’t see the gold shamrock once embedded on the hearth — but was later told by Margaret Guinan that it’s in her possession. “We chiseled it up because we couldn’t leave it behind!” she says. 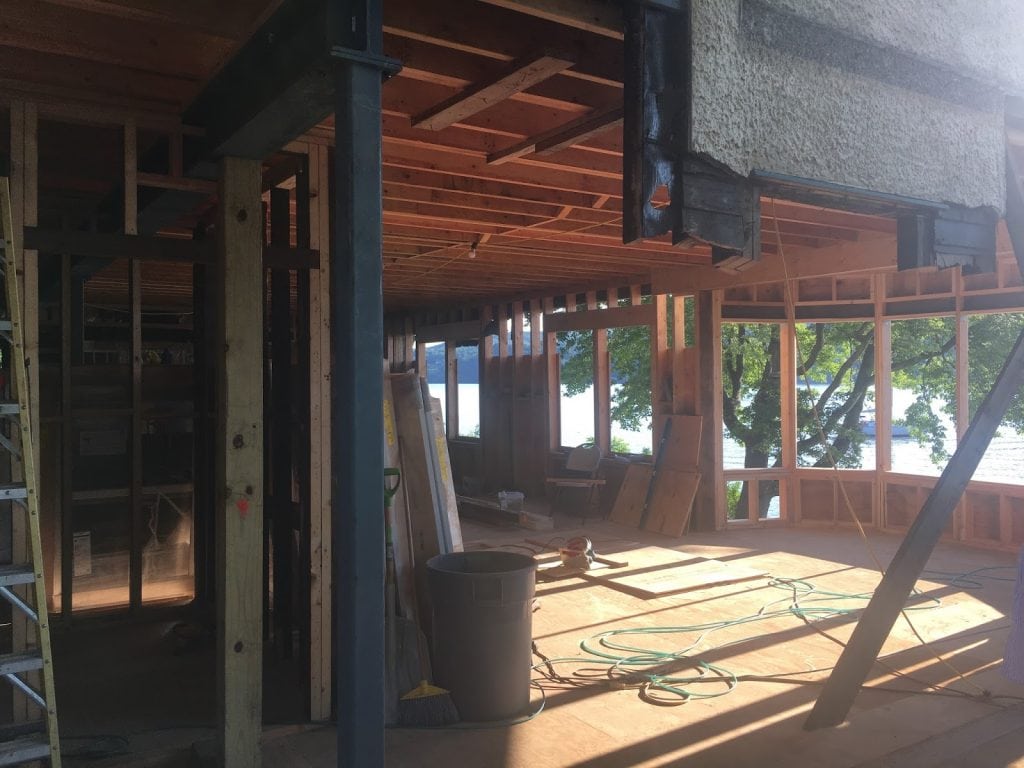 The former living area will become a dining room (Photo by G. Bounds)

The divide between the store and the living area is gone; this new open space will be the dining area. The upper floor will have two loft apartments.

The doors are scheduled to open in mid-March, and the restaurant will be run by Fresh Company, owned by Kimball Gell and Shelley Boris. In the meantime, after raising $400,000, the nonprofit Garrison’s Landing Association still needs about $40,000 to complete the work (see garrisonlanding.org/donate).

After my tour, I quizzed Boris about her plans:

What will you do with the space that was once the bar?

We thought it was too small to be the bar, so it will be for quiet dining with a fireplace. But on a slow night, folks can just drink there, of course.

Do you have a name yet?

We’re thinking about Dolly’s — a nod to Hello, Dolly! [which was filmed in part at Garrison’s Landing]. We like the open-to-all vibe of the name — a general locals place with very good food, but not fancy.

What type of food and drink?

That’s still a work in progress, but a casual, seasonal, varied and changing menu with a few standards, including burgers and fries. We are hoping for quality soft-serve for an in-house tasty dessert to walk with around the landing and along the riverfront, in keeping with our interest in reaching all ages.

What will you do in the basement?

Kitchen, second bathroom, storage and inside seating where folks can go if they are on the patio or the lawn and it rains. It also could be used for meetings, private parties or special dinners.

Bounds is the author of Little Chapel on the River: A Pub, a Town and the Search for What Matters Most, a memoir about Guinan’s. This story was adapted from her blog (littlechapelontheriver.blogspot.com).