Challenge would be determining who’s eligible for honor

Putnam County is considering awarding a service medal to veterans but has discovered it may not be so simple.

The only medal the county has ever issued was the Putnam County Service Medal, given around 1919 to those who served in World War I, according to Maj. Roderick Cassidy, a retired Army lawyer who lives in Brewster. He suggested to legislators at the county’s Aug. 22 Rules Committee meeting that, nearly a century later, it’s time to recognize those who served in World War II and more recent conflicts.

In 2016, Westchester County began honoring all who served on active duty in the Vietnam War era with a special distinguished service medal, he said. Westchester has distributed about 1,500 medals, at a cost of about $7 each.

The challenge isn’t producing the medals (at least two jewelers have expressed interest) as much as deciding who qualifies to receive one, Cassidy said. Lawmakers will have to define “veteran” status, based on criteria that could include class at discharge or whether a person saw combat. Further, does a veteran have to be born in Putnam County or be a resident during his or her service?

Westchester has broad guidelines, he said. Even some of those who served on the Navy tank landing ship USS Westchester County could be eligible. However, if you were born and raised in the Bronx, served out of the Bronx, and moved to Westchester after your service, you are not eligible, he said. 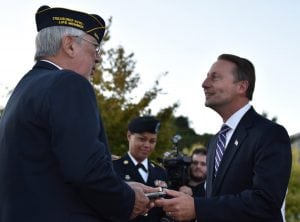 Westchester County Executive Robert Astorino (right) presents a service medal to a veteran at a ceremony in October 2016. Putnam County legislators are discussing whether to do the same for its veterans. (Photo provided)

There are other difficulties, especially if you set out to identify veterans. Westchester officials experienced this firsthand last year when they awarded a Westchester County Vietnam Service Medal to 800 veterans and families of deceased veterans in a public ceremony and mailed 700 more to veterans who could not attend, based on a database maintained by its Veterans Service Agency. But some veterans still said they were overlooked.

Karl Rohde, director of the Putnam County Veterans Service Agency (and a Westchester native who has received the county medal), said Westchester eased its burden by creating an application. “It’s not just given out because you served and meet certain criteria,” he said.

He also noted that National Guard and Reserves members are not legally considered veterans unless they complete 180 days of federal active duty, so the county would have to decide how to treat those individuals, as well as veterans who have died.

Rohde suggested the county stagger the awarding of medals to spread out the cost, starting with World War II and Korean War veterans, then Vietnam veterans, and then other conflicts.

“I don’t want to sound like I’m trying to dissuade anyone, especially because we’re losing our World War II and Korean War veterans rapidly,” he said.

While one veteran in the audience cautioned the legislators against making it too difficult to receive the medal, the lawmakers were assured there are plenty of candidates. Cassidy said that while the U.S. Census counted nearly 5,000 veterans in Putnam County, only about 1,600 are enrolled in a discount program offered through the county clerk’s office.

Having to apply will probably cut the numbers of medals that could be awarded by half, he said, “but there will still be hundreds to give.”

Cassidy said if lawmakers stick to the basic requirement of veterans who were born in Putnam, served out of Putnam, or returned to and still live in Putnam, there would at least be a few hundred candidates. “It would be very restrictive to say you could have never left Putnam,” he added.

Joseph Castellano (R-Southeast) who brought the matter before the legislature, said the county should start identifying World War II veterans. “I don’t think that would be more than 100 people,” he said.

Carl Albano (R-Carmel) said legislators “should put a couple of scenarios together, run some numbers, see what kind of statistics we have.”