“Good cooking is when things taste of what they are.”

That pronouncement, by Curnonsky (aka “Cur,” or Maurice Edmond Sailland, a French gastronome who died in 1956), punctures like a ripe tomato the Gallic pomposity that defined the exclusive world of cuisine for many years, when “good cooking” was a province far beyond the reach of mere mortals.

It is from this perspective I suggest we celebrate the humble bean. The word is wildly inclusive — snap beans, wax beans, sugar snaps and other varieties in which the pods are consumed, as well as legumes, or shell beans, with plump, edible seeds and less-edible pods.

The common ancestor of both varieties is, along with squash and corn, one of the “three sisters” of indigenous agriculture of the Americas. Shell beans, in particular, were embraced and widely acculturated as Italian cannellini (white beans) and borlotti (cranberry beans), French flageolets, English shelling beans and butter beans, or Lima beans. 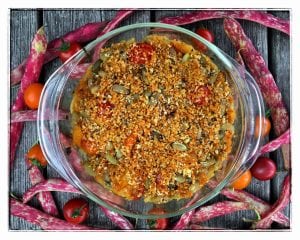 While shell beans are best known in their dried form, most varieties can be eaten fresh. Cooking is required, but the time is much shorter (30 minutes or so simmering in an aromatic bath) and no lengthy soaking is required. At the market, look for pods with a fresh green stem end — too green or too “fresh” means that the beans inside aren’t mature. Select pods that are a bit heavy for their size, indicating plump beans. Cooked with a couple of smashed cloves of garlic, a hank of fresh herbs and a splash of extra-virgin olive oil, the results are a much creamier version of their dried counterparts.

As a late-summer crop increasingly available at farmers’ markets, they can be enjoyed as most other summer vegetables — alone or in combination with other market features of this golden season — tomatoes, corn, squash and greens — in salads, summer soups, purées, with pasta or in gratins.

But again, it’s best to heed the advice of Curnonsky: “Above all, keep it simple!”

For my money, this simple shell-bean-and-tomato gratin (based on a recipe from Alice Waters’ Chez Panisse Vegetables) is a celebration of fresh beans, heirloom cherry tomatoes and herbs that even Curnonsky couldn’t argue with. The crunchy breadcrumb topping provides a textural foil to the creamy beans and bright, sweet-and-tart tomatoes.

A few final tips: Save any extra bean cooking liquid for other uses (soups or braising liquid) and be sure to save this recipe for the cold months as it’s almost as good prepared from quality dried beans.


Put shelled beans in a medium saucepan with cold water to cover by about an inch. Add smashed garlic cloves, the bay leaf, one of the sprigs of your chosen herb and a generous slug of olive oil (about 2 tablespoons). Bring pan to a medium boil; immediately reduce heat and simmer, stirring occasionally, until tender, about 30 minutes. Remove from heat, remove the herb sprig and bay leaf and season the liquid with salt to taste. Set the beans aside to cool in the cooking liquid. Drain the cooled beans, reserving the liquid.

Preheat the oven to 350 degrees. Warm a medium sauté pan over medium heat and add 2 tablespoons of the olive oil and the onion. Season with salt and cook until the onion is translucent. Add sliced garlic and sauté until fragrant, about 1 minute. Add tomatoes and herbs and cook for 2 to 3 minutes more until tomatoes soften. Season to taste with salt and pepper.

Combine and mix the beans and onion-tomato mixture in a 1-quart gratin dish or casserole. Add enough of the bean-cooking liquid to nearly cover. Mix breadcrumbs, a pinch of salt and a healthy grinding of pepper with about 2 tablespoons olive oil to moisten. Sprinkle crumbs over vegetables in a light, even layer. Bake in preheated oven 35 to 45 minutes, until breadcrumbs are evenly browned and vegetables are bubbling at the edge. Serve warm.