Creating habitat doesn’t end with homes for just pollinators and birds. Success means attracting other wildlife that will enjoy the lovely plants, berry bushes, and seedling trees I carefully planted.

Inevitably there will be losses, unrealized visions and imperfections, I’m realizing. While I didn’t intend to attract all these other creatures, I want to see it as a good sign that I’m contributing something to the ecosystem of the forest. The woods around me are covered in invasive species like Japanese barberry, garlic mustard, mugwort and Japanese stiltgrass. In fact, I need to see it as a positive sign because otherwise I’m just left frustrated at the way my plants keep getting eaten.

I’ve seen more critters in my landscape this year than ever before. As I’ve written previously, many of them buzz, while others nibble and munch. There’s a groundhog I’m certain is the same resident I’ve watched grow for the past seven years. At least I hope it’s the same one, because it’s bigger than any groundhog I’ve ever seen and deserves royalty status in the ground squirrel family. Is 50 pounds unusual? It’s more similar to a medium-sized, short dog than its own species. 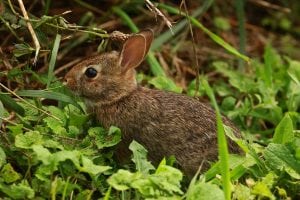 So cute — and hungry (Photo by Ross Corsair)

This summer there’s been a bunny invasion, as well. I never see rabbits in this part of East Mountain. There just isn’t any food in the woods. Though we usually don’t see deer hanging around, this summer there’s been a doe and two fawns in the yard at all times of day. Our trail camera has photographed foxes, raccoons, opossums, coyotes and, once, a bobcat. Bears have been spotted by nearby neighbors and once in our yard. I’ve seen hawks in the yard recently, turkeys making their rounds, and a blue heron has been visiting our unused pool daily for a couple of months. All the sightings are more numerous than any previous year.

My main line of protection is repellent sprays. I probably don’t use them as often as I should. It’s hard to remember and the weather conditions have to be right — not too windy, no impending rain. As a result, a flowerbed I’ve been working on for two years has big gaps where the dahlias, liatris, and ironweed (Vernonia noveboracensis) never make it more than 4 inches high before being munched down to the ground.

The Echinacea flowers must have been irresistible and were bitten off right before blooming and the phlox only has flowers that are above the groundhog’s reach. I’m guarding the turtlehead (Chelone lyoni) because I don’t have a lot left to bloom in the yard and it will be the last spot of color on one side. So far so good, but I haven’t checked today.

Fencing is the most secure option, but it changes the look and feel of the landscaping. The size, shape and slope of my property would make it arduous and costly. I don’t like the look of spot fencing around a small area and don’t want to bisect the landscape that way. The vegetables have to be fenced and that works, for now.

A lot of gardeners encourage trapping and removal as a humane way to deal with groundhogs or rabbits. From what I understand about the practice, I would need to find somewhere to transfer the animal and let it loose. Not only is that prohibited by the state Department of Environmental Conservation, it doesn’t seem humane. The animal’s chances of survival in a foreign environment aren’t high. And won’t another one just take its place?

That leads to coexistence and accepting imperfections and losses as part of the plan. As I learn what seems less palatable to my growing community of wildlife — my milkweed and monarda have been untouched — I’ll work with those plants and give up on dahlias.

One thought on “Roots and Shoots: Plant It and They Will Come”