Larry Moses’ father was an accomplished trombone player who wanted his young son to be one too. There was just one problem: At the time, his arms were too short.

“My uncle played trumpet, and I could reach the valves” on that, Moses recalls. “That was it for me.”

Moses, 64, a Beacon resident for the past decade, became a professional trumpeter and leads the seven-member Latin Jazz Express. He will lead a 90-minute jazz improv workshop for all instruments at the Beacon Music Factory beginning Thursday, Sept. 21, and meeting weekly through the end of November. Beginners are welcome.

The musician grew up in Queens and attended the Berklee College of Music in Boston to study composition, arrangement and theory. When he graduated, the Buddy Rich Orchestra had a rare opening in its four-strong trumpet section; he auditioned by sitting in for two sets during a New York City performance. He left after hearing another musician’s audition, thinking he was out of his league. Later he learned Rich was looking for “a more all-around player,” he says. “I guess eating your veggies and fruit in music is a good thing.” 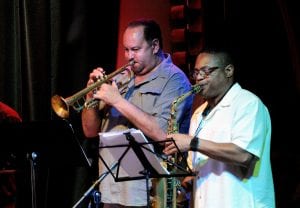 Larry Moses and Derrick James perform at the Towne Crier in July. (Photo by Ralph Baskin)

Moses spent six months touring with Rich, a noted taskmaster. “He was intense — he’d growl at you, but it was amazing and I absorbed so much,” Moses says. He next had an opportunity to sub for the Thad Jones-Mel Lewis Orchestra, which played a regular Monday night gig at the Village Vanguard.

“It was my ‘wow’ band,” he says. “It turned out they were going on tour.” One of their trumpeters left for the Count Basie band, and Moses got the call: “Can you join us in Wichita in two days?” He stayed with the orchestra for four years, touring in Scandinavia and recording five albums.

The lure of Broadway interrupted Moses’ orchestra days. It wasn’t the bright lights, he says, but the steady paycheck. “Broadway musicians are unionized, there are health benefits, a pension plan,” he explains. “It’s sad because jazz musicians dedicate their life to it, but there are only a few Wynton Marsalises around. The students I have now that are promising — I make sure they know the deal, and I stress to them that they should get their bachelor’s degrees and teaching certification, because, you know, food and shelter are good things to have.”

Moses’ first Broadway show was Sugar Babies, and he went on to play for hits such as Cats, Dreamgirls and Les Miserables. His last show was Come Fly Away, which featured an on-stage orchestra that played the original arrangements to many Sinatra songs while Twyla Tharp dancers performed downstage.

At the time, Moses lived in the heart of the Broadway district and could get a call at 7:30 p.m. and be there at 7:45, he says. He balanced the more lucrative Broadway work with playing with bands led by Maynard Ferguson and Eddie Palmieri, among others. 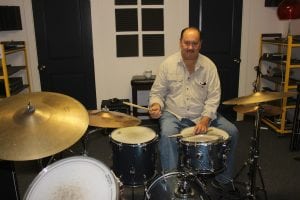 Larry Moses at the Beacon Music Factory (Photo by A. Rooney)

Like a refrain from one of the standards he plays, Moses answers the “What brought you to Beacon” question with “It was a woman.” He volunteers no further details, but adds that he loves the city and leading his jazz workshops. “It’s all ages, from an excellent 16-year-old upright bass player to guys older than me. They all keep coming back each term, which is great. There’s also a lot of homework involved, a lot of math, actually, in learning about chord symbols, how notes interact.”

If there are enough sign-ups, Moses separates the most advanced students into a separate session. Whether the musicians are advanced beginners or reasonably expert, Moses, who has also taught in the Bard College Big Band Jazz Ensemble program, keeps it chill. “Whatever the level, we go at tempo-di-learno — it’s a musical term — not really! — but we go through everything slowly and I’ll point out important things about the chord movement, guide tones, congruent notes, things that help you recognize the skeleton of the song.

“Miles Davis said something like ‘You do all the work at home and then you forget about it and try to be spontaneous up there.’ Back in the day the jam sessions went fast and if you couldn’t keep up you’d hear ‘Get off the stage and go practice.’ I try to keep people in a relaxed mode to absorb the music.”

For more information about the workshop, which costs $290, visit beaconmusicfactory.com or call 845-765-0472. The center, at 333 Fishkill Ave., offers a variety of other group classes for guitar, bass and composition, as well as rock ’n’ roll “boot camps” for teens and adults.

One thought on “The Jazz Master”