The historic Tioronda Estate on the outskirts of Beacon, which includes the former Craig House psychiatric center, was sold on Sept. 18, just hours before the City Council enacted a six-month building moratorium.

Daniel Aubry, the Beacon real estate agent who brokered the deal, said on Sept. 20 that he could not reveal the name of the buyer or the purchase price without the permission of the buyer, who he said is traveling outside the country. Aubry confirmed that the buyer is the same “investment group” that he referred to in an interview with The Current in July.

The details of the sale have not yet been filed with Dutchess County. 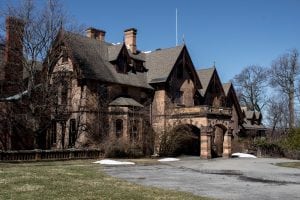 The investment group, which purchased the property from the estate of the late philanthropist Robert Wilson, plans to develop the parcel, and Aubry said he is in discussions with “hospitality groups” about bringing in a spa, boutique hotel or similar venture.

The property’s 14,000-square-foot, neo-gothic mansion, built in 1859, will be “at the heart” of any project, Aubry said. The balance of the 64-acre property will “very likely” be developed for housing, he said. Current zoning would allow about 22 single-family homes on the property.

The contract was signed in May but Aubry said the deal would not have happened if the moratorium had been in place.

“The moratorium creates a considerable amount of uncertainty, and the markets don’t like uncertainty,” he said. “I suspect that this could be the last land deal to happen in Beacon for a while — but I understand the community’s concern, and the people spoke.”

Regarding the possibility of zoning changes while the moratorium is in place, Aubry said, “I expect [the new owners] will use the six months to explore their options.”