When Teri Barr discovered in 2009 that her son, Max, was using drugs, she was well aware of the challenges she faced. She had been an addict herself, years before, but had survived.

It took four years, but Max also survived. His mother, who at the time owned Hudson Valley Outfitters on Main Street in Cold Spring, led him through a whirlwind of treatment programs, withdrawals and relapses, court appearances and incarceration and, finally, immersion in a program in California.

Max, who now lives in Florida, still receives therapy but is no longer struggling with drug addiction, his mother says. Getting to that point was not easy. 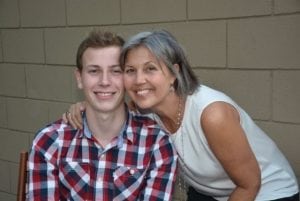 Barr says her son became addicted when he was 14. His feet had been badly sunburned while boating, and a doctor prescribed an opioid painkiller. After exhausting the first prescription, “we went back to the doctor and asked for more, because he was in pain,” Barr said. “As a mom, I didn’t want him to be in pain.”

She believes the stage was set for Max’s struggles even before his injury. “All of a sudden, a kid doesn’t just turn into an addict,” she says. “Kids who are vulnerable to using drugs have a need to feel accepted” but never quite feel they fit in, she says.

Around the same time, Max began smoking marijuana. His mother packed him off to a wilderness camp, and “it worked,” she says. “It was good.”

What happened next was not so good.

On the suggestion of the camp staff, Barr enrolled Max in a private school in New England but soon discovered that there was widespread drug use among its students.

So Max came home to Cold Spring to live with his mother. (Barr and Max’s father were divorced.) Before long, money began to disappear from the house and she found drug paraphernalia.

Interventions ensued: counseling, psychiatrists, a hospital in Kingston, stints in Arms Acres treatment center in Carmel. There were so many rehabs she lost count. “Probably 15 to 20” in four years, she says. “It seems like I was always taking him” somewhere, or “always scribbling down places where I could put him.”

There were also frightening runs to the emergency room – not because of overdoses but because Max would try to detox on his own and suffered side effects, she says.

The upheaval took a toll. Barr had kept her hiking and outdoor supplies store going despite the 2008 downturn, competition from online outlets and the vagaries of doing business in small-town America. But as Max’s saga continued, she found she could not concentrate on her work.

Thankfully, she had “amazing employees” she could rely on. She also found support, she says, at Al-Anon; the Putnam County-based organization Drug Crisis in Our Backyard, created by Susan and Steve Salomone after their son died of a heroin overdose; supportive friends and her religious faith, she says.

Over the years, the details of Max’s struggle have blurred, but they aren’t important, Barr says. “The point is that I was trying to keep him in a place where he was safe and he might hear the message about sobriety and recovery.”

It took a trip to jail to get there.

In 2013, Max and a friend stole her guitar. They were recorded by a security camera in a shop north of Cold Spring trying to sell it.

“I knew I had to get him off the street,” she said. “I pressed charges.”

Max was incarcerated at the Putnam County jail, where he remained for six weeks, underwent treatment and awaited his court date. Meanwhile, Barr found a treatment center in California able to take him.

When Max’s case came up in Cold Spring Justice Court, she says, Judge Thomas Costello agreed that sending him to the facility for sustained treatment made sense and the charges were dropped. Barr made the final arrangements picked him up from jail, and drove him to the airport.

“I would do anything I could to keep him safe,” she says. “They may seem like extreme solutions, but this is an extreme problem.”

She says from experience that addiction is tough to treat, noting that teenage boys seem especially vulnerable. All the recent overdose deaths in Philipstown have been young men, she says. “The boys struggle,” she says. “They’re too proud, their egos are too proud, to get help. They think they know everything.”

There is also the stigma of being addicted. “Addiction is an allergy to the body and a disease of the mind,” she says. “I don’t think people understand that.”

Since that day his mother drove him to the airport, two of his Cold Spring friends have died from overdoses.

After Max left for treatment in California, Barr relocated as well, in 2013. The move was in part to care for her ailing mother. Her ex-husband also had moved to the state for a job.

Max spent five or six months at the treatment center, which requires that patients complete its program, no matter how long it takes. The center, called Narconon, is linked to the Church of Scientology, using approaches developed by L. Ron Hubbard, the science fiction author who in 1955 created the religion. It does not require that patients be Scientologists, and Max is not a follower of the religion, Barr says. But what it had to offer worked for him.

“When you have a situation that is a microcosm of the world, where you can work on stuff, where there are trained therapists to help you through, that’s when the healing starts for some people,” she says. The program had a strict regimen that provided structure “that we couldn’t give him at home because he rebelled against it.”

Decades ago, Barr struggled with her own addiction. She began abusing alcohol and drugs at age 13, she says. Around age 25, she finally asked for help and was taken to a recovery house in North Hollywood that kept its patients busy. When not attending group therapy and courses, “we raked, swept up, cleaned bathrooms, peeled potatoes,” she recalls. “I don’t think they do that these days” in treatment.

She says that, as with Max, a key to her recovery was the structure. Before arriving, “I didn’t know how to live,” she says, adding that she didn’t realize there was a different way to live until she got sober. “Having that experience of living differently is what changes us.”

Like other people his age, Max is “trying to find his way,” Barr says. “He’s still searching for what works for him” and trying to make friends. Although he is not on opioids, “his struggle with addiction and mental illness may never be over,” she says. “He’s 22 and sober and for me that’s good enough. He’s on his own journey now.”

4 thoughts on “Fighting Back: Max’s Story”