What has been your scariest moment in the air?

It was my first year. It was like something out of a movie. I was called to the cockpit. For a moment it was like, “Y’all know I’m not a pilot, right?” We had lost hydraulics and I had to help crank down the landing gear. 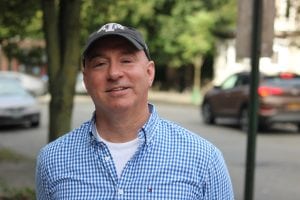 Do you have a favorite destination?

I’ve never grown tired of Paris. There’s always some spot I’m curious about, whether it’s a restaurant, a museum or a cemetery. If you’re bored in Paris, you have a problem. London is equally fascinating.

Have you met many celebrities?

Oh, yes: politicians, actors, scientists, captains of industry, diplomats, sports heroes, princes. I prepared a meal for chef Gordon Ramsay. When he tried to eat his steak, the plastic cutlery snapped. Buzz Aldrin was on the plane a while back. You think, my goodness, this man has been to the moon! And I planned our wedding music with Jose Feliciano. I was going to use his version of Sunny, but Candace doesn’t like the song.

Can you recall an especially funny incident?

Passengers sometimes overmedicate to get to sleep and do goofy things they don’t remember. One woman was putting duty-free chocolates into sleeping people’s mouths.

How did you prepare for this career?

I attended East Carolina University, but my father, a railroad worker, pushed me to do things like study French at the Sorbonne. That helped me get hired. Knowing history, and watching the news, are important. I was in England on the day of the Brexit vote. During Haiti’s earthquake I helped shuttle relief workers. I read about banking issues in Buenos Aires and all of a sudden I’m there — and can’t get any cash. The job hasn’t made me rich, but I have been enriched.