Bryan Quinn could be called an artist, but not one whose work is shown in a gallery — or even indoors.

Quinn is the principal and founder of One Nature, an environmental design firm whose main office is down an alley off the west end of Main Street in Beacon. Its native-plant nursery is down another alley nearby. No matter which alley you go down, the mission is the same: Creating spaces in which nature and culture can interact in a way that benefits both.

“Often in conservation we hear about minimizing our impact on the planet,” says Quinn. “I’m a full supporter of that, but my professional interest is how humans can be beneficial to the planet.” 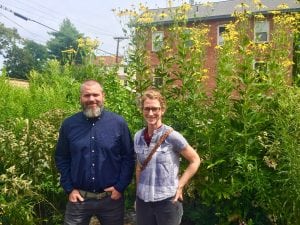 One Nature’s Bryan Quinn and Blair Patterson in the firm’s pop-up park on the corner of Main and Cross Streets in Beacon. (Photo by B. Cronin)

If you’ve walked down Main Street, you have seen One Nature’s work. For the past few years, the firm has stewarded a pop-up park it designed on the corner of Main and Cross on what had been a vacant lot.

There are more public projects to come in Beacon; The firm has been collaborating with the Wee Play Community Project to build a woodland playground in Memorial Park amongst the grove of Black Locust trees. It will be designed for children who have outgrown the tot lot at the bottom of the hill.

One Nature’s most ambitious public project so far is across the river in downtown Newburgh, where last year the firm helped Safe Harbors on the Hudson, a nonprofit housing and arts group, transform a long-abandoned lot into the area’s most innovative park.

“I don’t think we’ve ever done anything that has gotten so much immediate universal support,” says Lisa Silverstone, the executive director of Safe Harbors. “Even though so much of our programming is accessible, it’s all behind a door. But this isn’t behind a door. It’s a barrier-free space for everybody.” 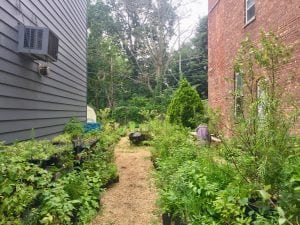 The garden center (Photo by B. Cronin)

“This is a good time to get some things in the ground now, to give them some time to get started on root development,” said Adamovic, who manages the native-plant nursery run by One Nature adjacent to Binnacle Books. “I would recommend putting in apple trees this time of year, some raspberries, even strawberries planted now will get a head start. Groundnuts are good to plant now, too. It forms a tuber, two to three inches wide. You dig it up and eat it like a potato.”

Everything for sale at the nursery is native to the Hudson Valley and the majority of the plants are from seeds propagated within a 40-mile radius. Every microclimate in the Highlands is represented, from the soggiest bogs (American Cranberry) to the driest mountain slopes (Prickly Pear Cactus, which can be found growing wild at the south facing summit of Sugarloaf Hill in Garrison).

“It’s been fun to talk to people who say, ‘I have this horrible property and I can’t grow anything on it. Help me!’ ” says Blair Patterson, the firm’s senior associate for construction. “We can enact change on a small scale even by selling them just one plant that will start that regeneration process.”

Although the park was designed to create several of what Quinn refers to as “exterior rooms” that differentiate sections of the park, its sightlines allow visitors to also keep the entire park in view. This allows for a feeling of being secluded but not hidden, visible without feeling on display, he says.

Since the park’s opening it has hosted performances, camps and spontaneous rallies and vigils.

“The great thing about working with public parks is that they’re for anybody,” says Quinn. “When we were working on it, people walking by would always ask us, ‘What are you building?’ And we’d say, ‘A park!’ ‘For who?’ ‘For you!’ ”

Safe Harbors Green in Newburgh, at the corner of Broadway and Liberty Streets (Photo by B. Cronin)

As with all of its projects, One Nature planted only native species at Safe Harbors Green after touring adjacent blocks and taking note of what plants were growing wild. Pollinators such as milkweed and goldenrod supply food for butterflies and bees, clover and bluestem grasses aerate the soil, and in the years to come the magnolias, elms and the pin oak in the center of the park will create a canopy.

“In environmental design, when you’re working with plants, you have to remember it’s a slow process and think long term,” Quinn explains. “As these trees grow, the character of the park will change.”

Thanks to the plant selection and the construction of infiltration basins known as swales, the park absorbs all rainwater. “Not a single drop leaves this park,” says Quinn. One Nature even took into account the increasing severity of storms expected because of climate change and installed a swale of last resort, deeper than the rest, to manage the flow of floodwaters into grates that will wind the water into the streets at a controlled flow.

“I hope they never have to run, but if they do, it’ll work,” Quinn says. “If we ever get another hurricane up here, I’m going to pull my truck up to the park and wait out the storm to see if it fills up.”