In July 2015, Brandon del Pozo, then a resident of Nelsonville and a longtime New York City police officer, was named the police chief of Burlington, Vermont, population 42,000. In Burlington, he says, opioids lie just below the surface of all major crimes, including homicides. But he has become a leading voice for approaching the crisis as more than an issue of punishment.

How do your officers handle addicts differently than traditional law enforcement?

People on both sides of this issue — the “law-and-order” and “harm-reduction” camps — have been dogmatic. We look at policing but also at public health. We are committed to putting high-end suppliers in jail, but I also have a social worker in charge of our opioid policy as part of our commitment to save lives. 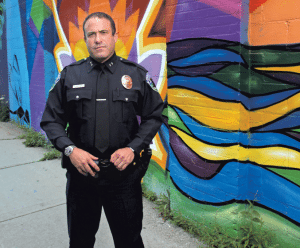 How has the community reacted?

The reaction has been positive. This is a progressive community with high expectations. Parents have come forward to get their kids into treatment. Low-level dealers have cooperated because they know they can trust us and that our focus is on high-level dealers.

Do you have a drug court?

Yes. It does a good job of picking out people who are eligible for treatment. Some do relapse; it’s the nature of addiction. Getting people into treatment can be difficult. We need better coordination and more resources. There is also little treatment in prison and that’s an obstacle.

How many of your officers carry Narcan?

Every Burlington officer carries and is trained in the use of naloxone. At this stage, any police department that doesn’t do that is living in the Stone Age, and the community should not stand for it.

One thought on “Fighting Back: Burlington Chief on Opioids, Crime”