The Haldane’s girls’ tennis team is on an upswing.

Last season the Blue Devils finished 12-3, with the doubles team advancing to the conference tournament.

This season, for the first time, there will also be an unofficial post-season team tournament organized by coaches. All league winners will be invited. 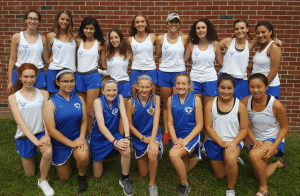 Haldane hopes to participate, and they may be on their way with a 4-2 start.

“I fully expect us to compete for a league title this year,” says Coach Simon Dudar. He expected the toughest opponent to be Pleasantville, who defeated the Blue Devils 3-2 on Sept. 28.

A record 18 players are on the roster (typically 9 to 12 come out, Dudar said). The numbers have “amped up the intensity in practice,” the coach says, although the teammates still “genuinely pull for each other to succeed.”

Dudar credits Rosemarie Sterling and Joe Curto for their youth clinics and community play days that have helped generate interest in tennis.

He says the teams’ three seniors also happen to be its three best singles players. Olivia Sterling has been the No. 1 player since the eighth grade, while Lucinda Strol and Alii Sharpley are 2 and 3.

One key to the team’s success is sophomore Julie Geller, a doubles player, who Dudar says keeps everyone in high spirits and is “the linchpin to having the best team mentality in a highly individualized sport.”

The Blue Devils have a busy week ahead. They travel to Croton on Monday, Oct. 2, and host Tuckahoe on Oct. 3 and Briarcliff on Oct. 4 before traveling to Beacon on Oct. 6.

3 thoughts on “Haldane Tennis Off to Another Strong Start”