Putnam County Executive MaryEllen Odell presented her sixth county budget Oct. 5 at the Putnam County Golf Course in Mahopac. She said it totals $155.3 million, and meets the state-mandated property tax cap for 2018 of 1.84 percent with a net increase of $2.3 million, or 1.5 percent spending increase, over the 2017 budget.

Under Odell’s proposed budget, which must be reviewed and approved by the Legislature, a homeowner with a property assessed at the average of $277,000 will pay $22 more in county taxes, or $984 annually.

The county’s portion of a homeowner’s tax bill is about 9 percent, which Odell said was the lowest county share of any tax bill in New York (the average is 21.5 percent). School districts make up 71 percent of the tax bill in Putnam, with towns accounting for 18.5 percent, she said, and villages and fire districts each taking up a little more than half a percent.

To balance the budget, Odell proposed using $4.6 million from the general fund, leaving it with a “very healthy” $12 million after adjustments when the current year ends, she said. 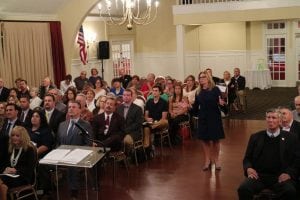 County Executive MaryEllen Odell makes a point during her budget presentation on Oct. 5 at the Putnam County Golf Course in Mahopac. (Photo provided)

Odell said, as she has in the past, that a large portion of the county’s expenses — 70 percent — are the result of programs that the state mandates but does not fund. She noted Early Intervention/Pre-Kindergarten as an example, saying it will cost the county $9.6 million in 2018, an increase of $753,000. With 363 students in the program, the cost per child is about $54,000.

In an effort to reduce this expense, the county executive proposed an alternative, voluntary plan for retirees on Medicare who use the state health insurance program. This would be a fully insured group retiree medical plan with group Medicare Part D coverage and a prescription plan. It could save the county $160 per retiree, and as much as $6,591 per family, according to Odell. If 80 of the 336 eligible retirees opt for the program, it could save $182,100, she said.

This was achieved even with the county making improvements at Tilly Foster Farm and the Putnam County Golf Course, as well as ramping up highway services and purchasing vehicles, Odell said.

In addition, the budget reflects a $2.4 million decrease in New York pension expenses because the county paid off its debt to the state through accelerated payments over the past four years. That saved taxpayers $773,000 in interest, she said.

On the revenue side, Odell said she expects the county will collect $58.5 million from sales tax in 2018, $42.3 million from property taxes, and $26.8 million from various departments, or a total of nearly $128 million. State and federal reimbursements add about $28 million.

Odell emphasized the importance of maintaining the extra 1 percent sales tax extension allowed by the state in years past, explaining that it is crucial to avoiding “layoffs, deep service cuts, and huge property tax increases.”