It’s not hunting season, however. That’s why he was hunting.

“We were in our camouflage jackets, and I said to my partner, ‘Isn’t this great?’” Dainack recalled. “We’re out in the beautiful woods and it’s like we’re hunting, only instead of deer, we’re hunting poachers.”

Dainack is an environmental conservation officer (ECO), one of 20 armed law enforcers who cover the part of Hudson Valley that the state Department of Environmental Conservation refers to as Region 3. (There are 330 officers statewide.) With headquarters in New Paltz, its officers patrol Dutchess, Orange, Rockland, Sullivan, Ulster, Westchester and Putnam counties. Originally called game protectors, the first ECOs were appointed by the state in 1880. 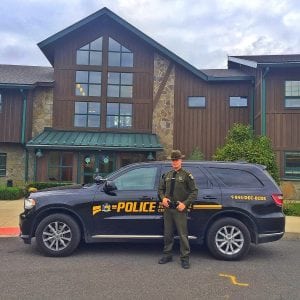 Officer Dustin Dainack outside the Region 3 headquarters (Photo by B. Cronin)

The job has its dangers. In November 2016, a man hunting illegally in Pine Plains shot and critically wounded an ECO. He claimed he mistook the officer for a deer but pleaded guilty to felony assault.

Dainack, a native of Hurleyville, in Sullivan County, is a 2008 academy grad and one of two officers assigned to patrol Westchester and Putnam counties. (The other is Craig Tompkins, a Beacon native who graduated from the academy last year.) Because there is little public land for hunting in Westchester, Dainack spends many weekends there tracking people who are illegally hunting on private land.

In Putnam County, by contrast, he often deals with beaver dams.

“Either a beaver is building a dam somewhere that people don’t want one, or they’re building a dam somewhere that people do want one and somebody else is taking it down,” he explains. Removing a beaver dam is illegal without a permit, so Dainack must determine if someone should get a permit to remove a dam, or issue a violation for someone removing a dam without a permit (in either case, the beaver is not issued a violation).

Although conservation officers have the same power and authority as a state trooper (meaning they can write you a speeding ticket), they deal with everything from illegal dumping to water rescues to fishing regulations to air quality violations. 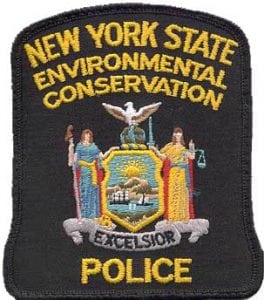 “You think it’s going to be a slow day and then you get a call that someone is shooting hawks in downtown Yonkers,” said Dainack, which is why becoming an environmental officer requires extra training at the police academy to study environmental law, poisonous snake identification, seamanship and boat operations, to name a few topics.

“I have a lot of friends and family who are police officers, and they told me ‘We don’t go swimming,’” Dainack said, “whereas we get handcuffed and thrown in the pool” as part of training.

Dainack has been an ECO since 2008 and was transferred to Region 3 in 2014 from New York City. “People are surprised to hear New York City is one of our busiest areas,” he said. “They say ‘There’s not a whole lot of fish and wildlife in Manhattan.’ But there is. The first time I saw a sturgeon was under the Brooklyn Bridge.”

In New York City, ECOs check on recreational anglers on piers and at harbors, as well as the commercial fisherman in the markets and offshore to make sure what’s being sold isn’t undersized, over quota, or off limits. They go undercover to bust ivory dealers; New York was one of the first states to ban its sale. Dainack took part in the agency’s “Ivory Crush” in Central Park in August, in which $8 million worth of illegal ivory was destroyed.

There is also a burgeoning exotic animal market, most of which is illegal.

“On one of my first days on the job, in Brooklyn, we had a guy with a kangaroo in his apartment,” Dainack said. Rescuing the animals is only the first step. The officers also must figure out what to do with them, such as when Dainack helped bust someone with 37 reptiles, including alligators. Since setting a 20-foot Burmese python free in the Highlands isn’t an option, ECOs must locate zoos or individuals with the right permits and training. 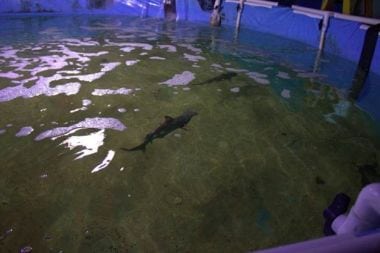 Sharks in the basement (DEC)

While it’s hard to talk your way out of being caught with a basement full of sharks (discovered in a Lagrangeville home in September), Dainack says ECOs have heard every other excuse in the book. Like the man in Jamestown who was discovered this past summer with a deer living on the second floor of his home; he told the officers he thought you could keep a deer for up to six weeks. (Nope.) Or the man in Essex County who bagged three turkeys during the spring season when the limit is two and bragged about it on Facebook. When confronted, he claimed he killed the second and third turkeys with one shot. (Also, nope.)

“For minor violations, if the person says right up front, ‘OK, I’m sorry, that was wrong,’ it usually works out pretty well for them,” said Dainack, “as opposed to people who you know are just lying to you through their teeth.”

If you witness an environmental crime or believe a violation of environmental law occurred, call the DEC enforcement hotline at 844-332-3267.

Among the worst liars are fishermen who catch more fish than are allowed and then attempt to hide them. This is especially common during runs of striped bass, which state law says must be at least 18 inches long and limited to one per day. The bass season is April 1 to Nov. 30.

“We see them,” taking too many fish, Dainack said. But when the officers approach, the fishermen say, “We haven’t caught anything today.”

“At which point the fish, which are in a plastic bag in the bushes, start flopping around,” said Dainack. “It’s almost like they’re saying, ‘Help me!’ ”

Police Blotter — in the Woods

State environmental conservation officers (ECOs) responded to more than 26,000 calls last year and issued 22,150 tickets. Most calls were routine, but once in a while the agency’s weekly blotter reads like a mix of wildlife and the Wild West. Some recent highlights:

On Oct. 17, ECOs Steve Shaw and Ryan Kelley received a phone call from a concerned citizen in Saratoga County stating that he had witnessed a vehicle driving up and down a driveway and then heard a single gunshot. Shortly thereafter, the caller saw lights in a wooded area. All of the activity occurred about an hour past legal hunting hours.

When the ECOs arrived, they located an antlerless deer hanging in a tree. A man at the residence admitted to shooting it. “I didn’t even see a deer last season and the temptation was just too much for me,” he said.

The man was charged with killing a deer except as permitted by the Fish and Wildlife Law, hunting during closed hours, hunting with the aid of a motor vehicle and taking deer with the aid of an artificial light. The deer and gun were seized as evidence. 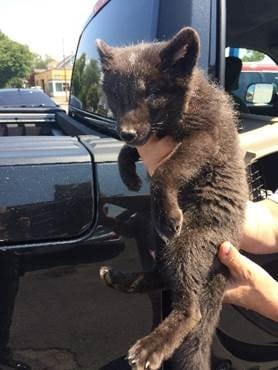 On Aug. 3, ECO Mark Mazurkiewicz received a call regarding an ad on Craigslist for an 8-week-old female Arctic Fox pup (right) for $600. A woman in Erie County said she had bought it in Michigan. She was ticketed for offering a wild animal for sale as a pet.

On Sept. 9, the opening day of early bear season, ECOs Max Nicols and Lucas Palmateer were patrolling Pochuk Mountain State Forest in Warwick. One vehicle at the trailhead caught their attention when they noticed jars of honey on the passenger seat. They encountered three hunters returning to the car and casually asked where they planned to hunt in the morning.

The next day, the ECOs returned to Pochuk State Forest and located the hunters, who immediately began to pack up. The ECOs located two piles of illegal bait — cold-cut meats and sausages, pastries, peanut butter and multiple piles of white rice stuck together with honey. One of the hunters took off running down the mountain. Nicols caught him while Palmateer stayed with the others.

All three hunters were issued tickets for Hunting Bear with the Aid of a Pre-Established Bait Pile and the subject who fled was issued a ticket for Failing to Comply with a Lawful Order of a Conservation Officer.

On Sept. 30, ECOs Brian Gustitus and Justanna Bohling participated in an amnesty day in Suffolk County. Throughout the day a steady trickle of residents arrived to surrender their illegally possessed animals. By the end of the day, the group had collected two Yellow Bellied Sliders, four Eastern Box Turtles, two American Alligators, two raccoons, a Nile Monitor, two Common Snapping Turtles, a Gulf Coast Box Turtle, a Black Throat Monitor, and a Barred Rock Rooster. The animals will be given to licensed exhibitors who will use them for educational purposes. 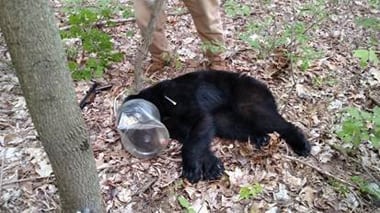 Bear in a bucket (DEC)

Bear in a bucket

On April 24, ECO Andrew McCormick received a call from a woman in Broome County who said she had a black bear in her yard with a bucket stuck on its head. DEC staff placed two traps, and over the next three weeks, three bears were captured, but none turned out to be Bucket Head. On May 19, a resident contacted the office and said Bucket Head was in the backyard. After tracking the bear for six hours, McCormick and wildlife biologists tranquilized it (above) and removed the container, which was the type used to hold bulk pretzels or cheese puffs.