Almost everyone in the room had Puerto Rican roots and told stories of collecting truckloads of supplies, trying to get in touch with loved ones, and elderly relatives who refuse to leave because they’re too busy helping neighbors. Maloney, who represents Philipstown and Beacon, had seen much of this firsthand as part of the first congressional delegation to visit the island after the hurricane. 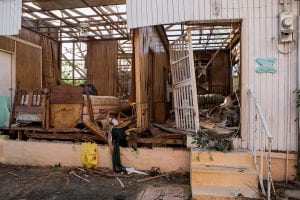 “The response was way too slow, and the response was way too small,” he said. “Seventy-five percent of the island doesn’t have electricity. You have a third of the island without potable running water. If there was anyplace else in the United States — if this were a state — and it was five or six weeks later and they didn’t have lights, all of us would be shouting from the rooftops. You cannot run an economy on portable generators.”

During the weeks after Hurricanes Irma and Maria, more than 5,000 utility crews restored power in Florida, with half of them coming from out of state under an Emergency Mutual Assistance Compact between power companies to send crews first and worry about payment later.

“We asked the Army Corp of Engineers how many crews they had working in Puerto Rico, and they said 200,” Maloney said. “The president of the United States needs to pick up the phone, call these power companies and say ‘I want those trucks down at the docks and the airfields so we can get them on the island tomorrow and I’ll figure how any legitimate concerns you have about payment.’ ” 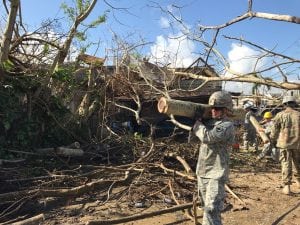 A spokesman for Central Hudson, which sent crews to Florida after Maria, said the utility received the first formal request on Oct. 31 for assistance in Puerto Rico from two industry organizations, the American Public Power Association and the Edison Electric Institute. A week later, the utility said it would send at least 20 electric-line contractors to the island.

Some Highlands residents are organizing their own relief efforts. Barry and Claire Nelson of Beacon, who own a home on Vieques, eight miles off of the main island of Puerto Rico, have been sending generators, solar lights, mosquito nets and insect repellents to friends there, as well as its Boys and Girls Club. They also hosted a fundraiser at Dogwood in Beacon for the Vieques Humane Society that brought in more than $1,600. 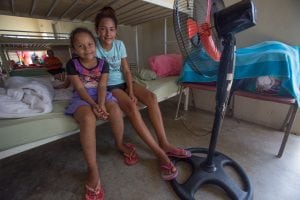 Two young residents of Vieques, Noemi Adorna and Zulmaria Garcia, at the shelter on Vieques about a week after the hurricane (Photo by Andrea Booher/FEMA)

Claire Nelson said she and her husband plan to travel to Vieques on Dec. 1 and will volunteer wherever they can do the most good, especially for the children. “They tried to open the school, but without water or electricity, they can’t,” she said. “The Boys and Girls Club opens in the afternoon for two hours, but a lot of the kids are out and about.”

Short of flying to Puerto Rico to volunteer, Maloney said the best way to help is to call members of Congress to pressure them to push for more resources.

“I was in Puerto Rico with Ron Johnson, the senator from Wisconsin who’s the chairman of the Homeland Security Committee,” Maloney said. “And I thought his questioning was condescending. He’s talking to the governor, who hasn’t slept in three weeks, and he’s telling him, ‘I don’t want any exaggerations on what this is going to cost. I want the real numbers. I don’t want any gold-plated stuff.’ 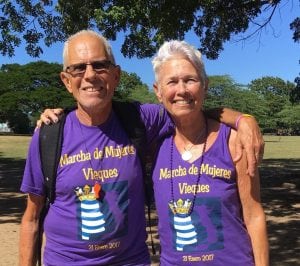 Barry and Claire Nelson of Beacon on Vieques in January, when they organized a Women’s March there (Photo provided)

“No one is trying to screw you over here, these are people who are desperately in trouble,” Maloney said. “And we know it’s going to cost a lot.”

Maloney also suggested reminding members of Congress that while Puerto Ricans living in the Commonwealth can’t vote in federal elections, they can if they move to a state.

“A lot of my colleagues didn’t realize Puerto Ricans were American citizens,” said Maloney. “When you clue them in on that, they start to connect the dots. Puerto Ricans are already citizens. They’re just moving, and a lot of them have family on the mainland. So I tell them, ‘If you want a quarter of a million angry Puerto Ricans voting in Florida next year, keep it up.’ ”