To mark the 50th anniversary of the publication of Pete Seeger and Woody Guthrie’s book on American folk songs of the Depression and labor movement of the 1930s, Hard Hitting Songs for Hard-Hit People, the Towne Crier Café in Beacon will host a benefit concert at 7 p.m. on Sunday, Dec. 3, for the Beacon Food Pantry and the American Center for Folk Music. 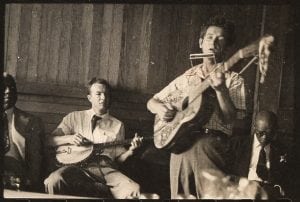