Food writer Molly O’Neill once called chowder “edible democracy.” It is certainly one of the most American of recipes — if you can simply call it “a” recipe. Chowder is more a state of mind, and in its myriad forms captures the essence of the American spirit: ruggedly individualistic, assertive and proud of its heritage; at its best, humble, substantial, inclusive and comforting.

As such, recipes abound in every region and micro-region of the country, each proclaiming itself original and authentic, which, like all self-identified Americans, all certainly are.

There is fittingly a sketch of a recipe included in the great American novel Moby Dick, Herman Melville’s homage to the sea and this country; the American statesman Daniel Webster is famous for his much-circulated version and President John F. Kennedy, a Bostonian, was particularly fond of his “chowdah” and his preferred recipe is preserved in the National Archives.

Ostensibly the culinary and etymological descendent of Breton’s Acadian fishermen, chowder (née chaudree, named from the pot, chaudron, in which it was prepared) is a simple seafood stew featuring the catch of the day, originally thickened with hardtack (ships’ biscuits) but now more commonly potatoes, almost universally seasoned with onions, pork, salt and pepper and enriched with butter and eventually milk.

Like all culinary classics, it has been subject to generational and commercial “improvements”: spices or spirits, additional vegetables (corn, celery) and even a roux or heavy cream to thicken this delicate celebration of the sea to a porridge-like (at best) or wallpaper-paste consistency. Possibly the most abhorred defilement is the addition of tomatoes as in Manhattan clam chowder, an abomination at its worst, but perhaps an acceptable stew or soup variant when viewed kindly.

None of these additions offers any substantial increase in enjoyment to this concoction of onions, pork, spuds, fish and dairy in which each element holds its own but all come together in a bowl of warm comfort and national celebration on a cold winter day. 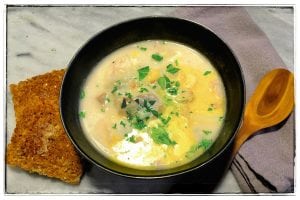 Regarding its individual ingredients: Select firm, white-fleshed fish — cod, hake, haddock and halibut — whatever is available, freshest and affordable. (Clams or other shellfish can be used but that’s another story.) If you’re energetic and/or authentic enough, a fine seafood broth can be made from fish heads or other less appealing bits from whole fish or even the eventual chowder fish chunks, parboiled briefly in water with onions and a couple of bay leaves. Marbled Meat Shop on Route 9 in Philipstown was offering its own seafood stock in quart containers a few weeks ago and bottled commercial clam broth will do in a pinch.

Salt pork is traditional but can be hard to find, but thick-cut bacon adds an additional smoky edge to the proceedings.

The food writer and Maine native John Thorne, whose definitive study, “Down East Chowder,” appears in his thoroughly enjoyable and enlightening book, Serious Pig, offers the one “innovation” worth taking seriously. He specifies that potatoes should be cut in the manner referred to as “thick-thin.” This simple technique involves cutting your potatoes (any all-purpose potato will do, although Yukon Golds are consistently available and dependable) into bite-sized wedges “the shape of an ax head” by casually circling the peeled spuds with a paring knife. This allows the thin parts to “melt” into and thicken the chowder while leaving larger chunks to provide a creamy counter-texture to the flaky chunks of fish.

Warming the milk before adding it speeds up the proceedings. A dollop of butter added to the bowl when serving provides an inviting puddle of liquid gold. The only thing you could possibly need is a slice or two of toasted country bread for a comforting and satisfying meal.

Chowder is more a state of mind, and in its myriad forms captures the essence of the American spirit …

Melt butter in a 3- to 4-quart stockpot over medium heat. Sauté pork or bacon five to six minutes to render some fat. Add onions and continue to cook until slightly caramelized. Add stock and bay leaves, bring all to a low boil and simmer for two to three minutes.

Serve hot in large bowls, garnished with a healthy knob of butter.