In a bipartisan outcry, local elected officials criticized proposed changes to the federal tax code that would abolish deductions for state and local taxes and could complicate the use of bonds to fund municipal projects, while reducing taxes on corporations and the ultra-wealthy and increasing the federal deficit by more than $1 trillion.

Encouraged by President Donald Trump and with little deliberation, the Republican-controlled U.S. House and Senate each passed tax-reform bills in recent weeks. All Democrats in both chambers voted “nay,” while a single Republican voted against the Senate bill. In the House, 13 Republicans opposed the chamber’s legislation. The bills await action by a joint conference committee to resolve differences before a single version returns to each chamber for a vote.

Critics of the legislation, including the Putnam County Legislature, Nelsonville Village Board and New York State Association of Counties (NYSAC), said eliminating the deduction for state and local taxes amounts to double taxation because, in the words of a resolution passed on Sept. 18 by the Nelsonville Village Board, residents “would be forced to pay federal income taxes on the taxes they pay to state and local governments.” (The all-Republican Putnam County Legislature adopted a similar resolution on Nov. 8.) 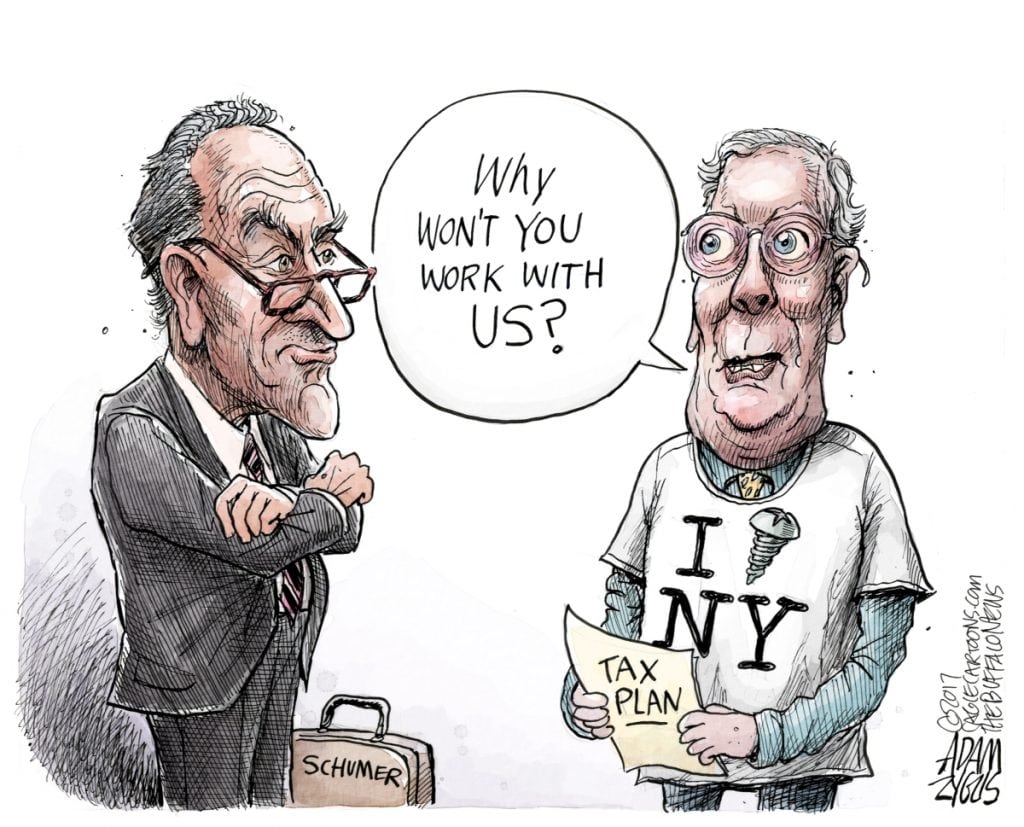 Putnam County Executive MaryEllen Odell, a Republican who also serves as NYSAC president, said Wednesday (Dec. 6) that while the tax system needs reform, eliminating or limiting the state-local tax and mortgage-interest deductions would be “a hard hit” for New York.

“There’s still not a lot of room for individuals and families” to benefit “and that’s a big concern,” she said. “There’s a whole lot of points that have to be addressed.”

In its resolution, the Putnam County Legislature noted that New York is a federal “donor” state, sending far more to Washington than it gets back in federal projects and spending. According to NYSAC, the toll for New York is $48 billion and eliminating the state-local exemption “would only increase that discrepancy.”

According to an analysis by the Tax Foundation, New York ranks ninth in the nation for combined state and average local tax rate, at 8.49 percent. New York ranks second for the amount residents deduct for state and local taxes, a total of about $68 billion annually. In Putnam County, the average deduction taken for local, sales and real estate taxes in 2015 was $18,161, according to the National Association of Counties; in Dutchess, it was $15,146. In New York City, it was $27,192.

In Cold Spring, Village Board Trustee Lynn Miller, who co-owns Go-Go Pops on Main Street, said the legislation will “have a huge impact on small businesses and make operating them extremely difficult. The number of deductions we will no longer be allowed to take is incredible.” Deputy Mayor Marie Early said that “many ‘trickle-down’ effects haven’t yet been recognized or thought through,” including the legislation’s implications for nonprofits.

Nelsonville Mayor Bill O’Neill said that “eliminating or capping the federal deductions for local taxes unfairly penalizes people like the citizens of Nelsonville who reside in a state and local community where taxes are very high,” even though their own village “strives to manage its budget and keep its taxes in check.” If the federal legislation is enacted, “the impact on our citizens will be painful,” he said.

Philipstown Supervisor Richard Shea, a Democrat, said that, for local municipalities, “hampering the ability to bond for infrastructure when coupled with the New York State tax cap will essentially cripple our ability to undertake timely repairs to roads, bridges and buildings. It also hampers recovery efforts from storm-related damage.”

Furthermore, he said, “elimination of the property-tax deduction will hurt working-class families and slow the construction sector of the economy. It makes no sense.” And “on top of this whole debacle,” he added, “is the proposal to tax graduate students for tuition. How will that give America an edge in the fields of science, medicine and technology?”

Democratic leaders at the state and federal levels were equally critical. Rep. Sean Patrick Maloney, a Philipstown resident who represents the Highlands in the House, said, “I’m all for cutting taxes, but the choices Republicans in Congress made when writing this dumpster fire show that this plan has nothing to do with helping regular working people.”

Sen. Kirsten Gillibrand said that “we need to fix our tax system so it doesn’t keep [producing] so much difficulty for working families in our states. If this bill actually did that, it would be real reform, and it would be bipartisan.” The state-local tax deduction “makes it possible for families to afford to buy a home” and that abolishing it “would hurt millions of Americans.”

The state-local tax deduction dates back to 1862, during the Civil War, when Abraham Lincoln, the first Republican president, signed legislation that established the federal income tax system and permitted the state-local tax write-off. When the federal government reconstituted the tax code in 1913, it again included the deduction.

Gov. Andrew Cuomo, another Democrat, said that if the legislation becomes law it “is going to be devastating for New York.”