Town board wants gas tankers to stop backing in

Wary of “a catastrophe waiting to happen,” Philipstown Town Board members on Dec. 7 called for multi-faceted action to control gasoline tankers at Philipstown Square, the shopping center on Route 9 at the northern edge of town.

Board members said problems occur when tanker trucks, each carrying 6,000 to 7,000 gallons of gasoline, attempt to supply the station, located on the opposite side of the juncture of Fishkill Road, a county road, and Route 9, a state highway. 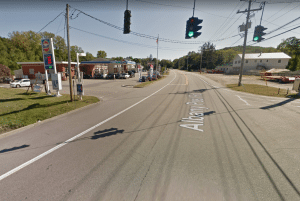 Councilor John Van Tassel, a member of the North Highlands Fire Department, which responds to accidents there, said two collisions had occurred, each involving a car that broadsided a tanker angled across Route 9 for a delivery. The most recent incident took place a few evenings before the board met, he said.

Van Tassel noted that despite numerous warnings, tankers continued backing into the station, with the cab in the Lyons supply yard at the intersection’s southwest corner and the rear of the truck stretched across the highway into the gas station. “It’s a catastrophe waiting to happen,” he said, noting the risks include not just a disastrous crash but gas spilling across the road and into the area aquifer.

Board members said gas deliveries occur as frequently as twice daily and that Putnam County Sheriff’s deputies have said they can do little, because, as Councilor Nancy Montgomery reported, “apparently it’s not a violation to back a tractor trailer filed with gasoline off of Route 9.” However, she said, she had found sheriff’s officers “very resourceful and helpful and willing to work together, so I’m looking forward to finding a solution.”

Langley commented that “for a deputy to say there’s no ticket he can write is actually inaccurate,” because deliveries necessitate on-the-road traffic control, as in the case of tree-cutting crews operating along the highway.

Likewise, any driver angling a truck with the front on one side of the highway and the rear at the other “is backing up unsafely, creating a public hazard. There are summonses that can be issued and that will be addressed” after he becomes sheriff, he pledged.

Board members blamed the problem in part on an indifference to the site plan approved by the Planning Board for handling vehicles at the site. Failures to follow a site plan can result in its revocation by the town government, forcing business owners to re-apply in order to operate.

After the latest incident and a visit from the building inspector, Van Tassel said the station owners promised to instruct tanker drivers to stop backing onto the premises.

The intersection has a three-way light controlling traffic going north and south on Route 9 and to or from Fishkill Road but no light on the fourth side, at the exit and entry to the gas station, creating confusion.

Supervisor Richard Shea said Fred Pena, superintendent of the Putnam County Highway Department, agreed to look into the the overall Fishkill Road-Route 9 situation because “something has to happen there. It’s just a bad intersection, all in all. It’s not acceptable.” He said the two will likely confer soon with the New York State Department of Transportation.

Turning to another road matter, the board expressed satisfaction at the work undertaken this fall under the direction of the Philipstown Highway Department to raise Manitou Station Road two feet. It still could flood in a major storm, but its elevation should keep it open the vast majority of the time, Van Tassel said. The effort represents the initial stage of planned improvements, Shea observed.

Running west from Route 9D along a marsh toward the Hudson River, the road has suffered severe washouts and the area flooded in 2012 during Hurricane Sandy, forcing emergency evacuations of some residents. Conditions there have prompted discussions for some 10 years by various governmental players, including Philipstown, Putnam County, the Army Corps of Engineers and Metro-North Railroad, whose tracks parallel the river.

The board recommended to state and county governments the appointment of Cold Spring resident Stephanie Hawkins to the Metropolitan Transportation Authority’s Permanent Citizens’ Advisory Committee, a panel that assists the MTA governing board but lacks voting power.

Neal Zuckerman, a Garrison resident who previously served as an advisor from Philipstown, is on the MTA board. Hawkins is a former Cold Spring village trustee and the spouse of Cold Spring Mayor Dave Merandy.

5 thoughts on ““Catastrophe Waiting to Happen” at Philipstown Square”