Royal Carting asked to do test run in village

The Village of Cold Spring may be getting out of the garbage collection business.

At the Jan. 9 meeting of the Village Board, Mayor Dave Merandy announced that Royal Carting will do a test run on Jan. 30, collecting both garbage and recyclables throughout the village. The board and Royal will then evaluate whether the company should take over from the Highway Department.

Merandy, who has wanted to reassess garbage collection since first taking office, commented that contracting out collection would free up the Highway Department to concentrate on other duties. “Garbage and recycling take up so much time,” he said. 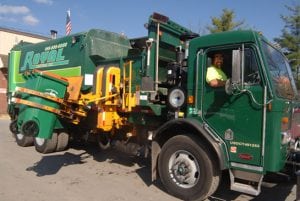 Royal Carting will conduct a test run for the village. (Photo provided)

However, Merandy expressed concern over how Highway Department workers might be affected. “We’re not out to kill anyone’s job,” he said, stating that he wants to ensure “the guys who have been working here are employed and stay with us.”

Merandy also emphasized that the cost to taxpayers would have to be considered. If the change is adopted, “individual homeowners would be responsible for pickup and for contracting with Royal,” he said. “The village would be out of the business totally.”

The cost to residents won’t be known until Royal completes the test run. “There are a lot of variables,” Merandy said. The company has indicated that residents would be charged a reduced rate due to the large number of homes involved.

The Cold Spring Police Department handled 63 calls for service in December. Two arrests were made, for disorderly conduct and for unlicensed operation of a vehicle. Thirty-one parking tickets were issued along with 25 traffic violations.

Village workers pick up garbage beginning at 1 a.m. on Tuesday and collect recyclables on Friday. Royal will begin the Jan. 30 test run at 4 a.m. Two trucks will work in tandem, one handling garbage and the other recyclables. Workers from the Highway Department will accompany them.

The test run will be done at no cost to the village, and any revenue from recyclables will be refunded.

Royal handles garbage collection in a number of Hudson Valley communities including Beacon, Fishkill and Wappingers Falls. They also do garbage pickup in Nelsonville under contract with the village, not with individual residents. Cold Spring’s Forge Gate condominiums also contracts with Royal.