The number of people living on the streets or in shelters increased by 6.7 percent in the Hudson Valley in 2017, according to the latest annual estimate released last month by the federal Department of Housing and Urban Development.

The figures came as no surprise to Christa Hines, executive director of Hudson River Housing in Poughkeepsie. The biggest problem facing Dutchess County, she said, is the lack of affordable housing.

“When affordable housing starts to decrease beyond where it is now, there are no places for people to go,” she said. “We need to build a very inclusive community where there are options for everybody.” 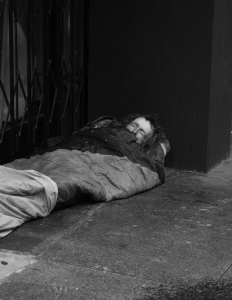 The number of homeless people in the U.S. in 2017 rose for the first time in seven years. Higher urban rents have driven more people into the streets. (HUD photo)

Many of the people who find themselves homeless suffer from mental illness, Hines noted. “We’ve had to do a lot of training, not just in how to deal with people, but empathy training so we have an understanding of what they’re dealing with,” she said.

Linda Malave, who is the organization’s associate executive director, noted that for those used to the stability of a hospital or institution, the transition to the streets can be jarring.

“If you’ve been told when to eat and when to sleep and here’s your medicine and now you’re on your own, it’s scary,” she said. “And they’re landing in our shelter, which is not appropriate, either.”

A nonprofit, Hudson River Housing began in 1982 with 25 staff members and a six-bed emergency shelter. It has since grown to include more than 130 employees and 60 beds. (The shelter is located on the grounds of the former Hudson River Psychiatric Center, which closed in 2001.) That’s still not enough; during the winter there are typically 20 to 30 people who must stay in a transitional housing facility the group runs in the same building.

Both Hudson River Housing’s shelter and the Living Room Program offer more than beds, showers and hot meals. Case managers work with visitors to connect them to social services and obtain benefits that in many cases they don’t know they qualify for. Employment help is available, although in some cases, shelter guests already have jobs but are making minimum wage and can’t afford housing. In those cases, Hudson River Housing tries to match them with roommates.

Hudson River Housing also offers financial assistance for people moving from the shelter for the first month’s rent, security deposits, utilities or anything else that would prevent people from being able to move. Case managers inspect apartments and speak with landlords to make sure that people aren’t being taken advantage of. 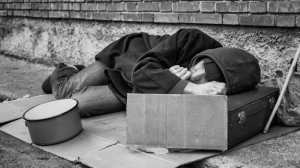 Once a person is off the streets, the group works to provide training, clothes for interviews and help with resumes. Last year, Hudson River Housing converted the former Poughkeepsie Underwear Factory at 8 North Cherry St. into affordable housing and artists’ lofts with a cafe and kitchen that offers further employment options.

“People need opportunities,” said Hines. “They need work if they’re able to work, and they need to get the resources that are available to them.”

The group’s efficiency, including the 24-hour care it provides, can mask the pervasiveness of the problem. Since people have somewhere to go, there can be fewer homeless people on the street, and the group also has programs that prevent people from being evicted and becoming homeless.

“If we didn’t have these shelters and resources available, you’d see a lot more people out,” said Hines.

More resources will be available on Sunday, Jan. 21, as the nation undertakes an annual Point-in-Time survey of homeless people mandated by the Department of Housing and Urban Development.

In Dutchess County, social workers and students from the Department of Social Work and Sociology at Marist College will search the streets and visit areas that the police have identified as places that homeless people tend to congregate, including a Poughkeepsie shelter.

In Beacon, the count will be done at the Tabernacle of Christ A/G Church at 483 Main St., which hosts a soup kitchen during the week.

Homeless by the Numbers

The number of homeless people in New York state has increased 36 percent since 2010.

The survey is about more than the count, explained Sue Tallardy of Mid-Hudson Addiction Recovery Centers in Poughkeepsie. “It’s about connecting people and giving back to them, as well.”

When Tallardy took over overseeing the count in Dutchess County a few years ago, they gave out backpacks filled with toiletries and other supplies. Now the program has volunteers on hand such as barbers, beauticians and healthcare workers. ShopRite hands out applications and in the past has hired people on the spot. To volunteer, call Tallardy at 845-471-0310.

“I would love to get a podiatrist in here,” she said. “I know it’s difficult because of insurance, but when we get people in here at the crisis center, their feet are in horrible shape.”