Did you hear about the ex-cop named Mike MacCauley who was riding the Hudson Line home to Tarrytown after losing his job as an insurance salesman when a stranger offered him $100,000 if he could attach a tracking device to another passenger whose identity was unknown except that the ticket slip on his seat was punched for Cold Spring?

MacCauley, played by Liam Neeson, is the protagonist of a newly released Hollywood thriller, The Commuter. After losing his job, he takes the 6:25 p.m. Metro-North train from Grand Central, which inexplicably makes several stops along the Lexington Avenue subway line. At any rate, after receiving a $20,000 down payment, he has about an hour to identify the passenger. 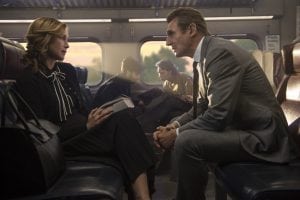 “For Cold Spring, a few stops past MacCauley’s usual one, to be epicenter of such intrigue is curious,” wrote film critic Jake Coyle, who lives in Croton, in his review for the Associated Press. “But then again, even the feds [federal agents are involved] deserve a bit of antiquing and a brisk hike.”

The Commuter, which has received mixed reviews (“gaping plot holes” is a typical observation), was not filmed in New York City or the Highlands but on a soundstage in London and at two stations in southern England that were “dressed appropriately” to stand in for Cold Spring and Tarrytown, according to the film’s production notes. (In September 2016, commuters in Worplesdon were amused to find their station transformed into the snowy, strange locale of “Tarrytown,” according to the Surrey Advertiser. It’s not clear which station became Cold Spring.)

In the notes, Neeson is quoted as saying the Hudson Line is familiar because he has ridden it regularly for 20 years to reach his country home in Millbrook, east of Poughkeepsie. Anyone seen him?

5 thoughts on “Mayhem on the Cold Spring Train”