For players, a ‘Zen-like’ experience

Few groups that have thrived for decades go unnamed, but don’t tell that to a loose-knit band of Philipstown skaters who share an intense passion for pond hockey.

Tom Ptacek, 60, has been chasing the puck locally for 20 years and thinks the nameless outdoor hockey competition dates back at least 45 years. John Benjamin thinks games have taken place for closer to 70 years. Both will tell you it’s not about naming the group or pinpointing when it all began; it’s about the game.

“Seven-on-seven is a big game; we’re happy playing four-on four,” Ptacek says. Players range from their teens to their 80s. They are mostly men, but a few women lace up, as well.

The local pond-hockey rule book is not thick: the goal is 6 feet long and 2 feet high, painted red; goalies are optional; no lifting the puck above the knees; no offside, although goal-hanging is frowned upon; no body checking.

“The best rule is that no one keeps score,” Ptacek says. “You just have a feeling which side got the better of the other.”

The size of the impromptu rink expands or shrinks depending on the number of players. There are no boards so an errant puck could end up a quarter mile away — a long skate for the retriever.

Teams are selected in a time-tested, unbiased manner: Sticks are put in a pile and randomly tossed to create two new piles, giving birth to opposing squads.

Mother Nature determines the quality of the ice; there is no Zamboni. Blowers and custom-made shovels are used to remove any troublesome snow. The group’s only strict ritual, Ptacek says, is to clear the playing surface after every game, even if changing weather means the ice won’t be playable the next day. 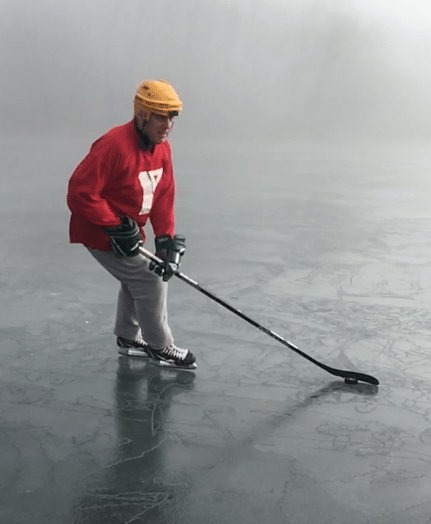 Local pond-hockey players must have an aversion to temperatures that climb over 32 degrees. The frigid temperatures of early January emboldened them. “We played every day,” Ptacek says, adding that 19 games have been played so far this season, a total that could reach 40 by spring.

Bill Foley started trekking to frozen ponds when he was a junior in high school. He’s 63 now and still relishes playing. “We’d play until dark, by far the best after-school activity,” he says. “Pond hockey is for pure enjoyment, and something I can share with my son and good friends.”

Stephen Ives, 58, says he has been skating on ponds since he was 5, and his love of hockey has only grown over the years. “It’s the perfect combination of free-spirited exercise, an intense but thoroughly friendly game, and communion with the great outdoors,” he says. “There is a timelessness to the game and a kind of Zen-like simplicity that connects you to your friends, the movement of the puck and the astonishing beauty of the ponds that is like nothing else I know.”

The 2018 World Pond Hockey Championships will be held in Plaster Rock, New Brunswick, from Feb. 8 to 11. It will feature 120 teams from 12 provinces, 35 states and 15 countries competing in men’s and women’s divisions.

John Horgan, 64, agrees. “It’s comradeship, fierce competition and whooping fun in insanely beautiful settings,” he says. “It’s a spiritual experience.” Horgan traces that sentiment to the first time he played at Earle’s Pond. Skating onto the virgin black ice, he saw a turtle swimming beneath him. “That was a very good omen.”

While pond hockey is recreational, players need to come ready to play. “Full pads are recommended,” says Ives. “It’s a rough game, even though there is no checking.” While players behave themselves, he describes the games as “spirited and fast.”

Until his retirement from the game last year, Lars Kulleseid, 80, was an inspiration to the other players, Ives says. “He brought both a boisterous good humor and fierce competitiveness,” he says. “His passion for pond hockey was infectious; he was also, at times, the roughest player on the ice.” 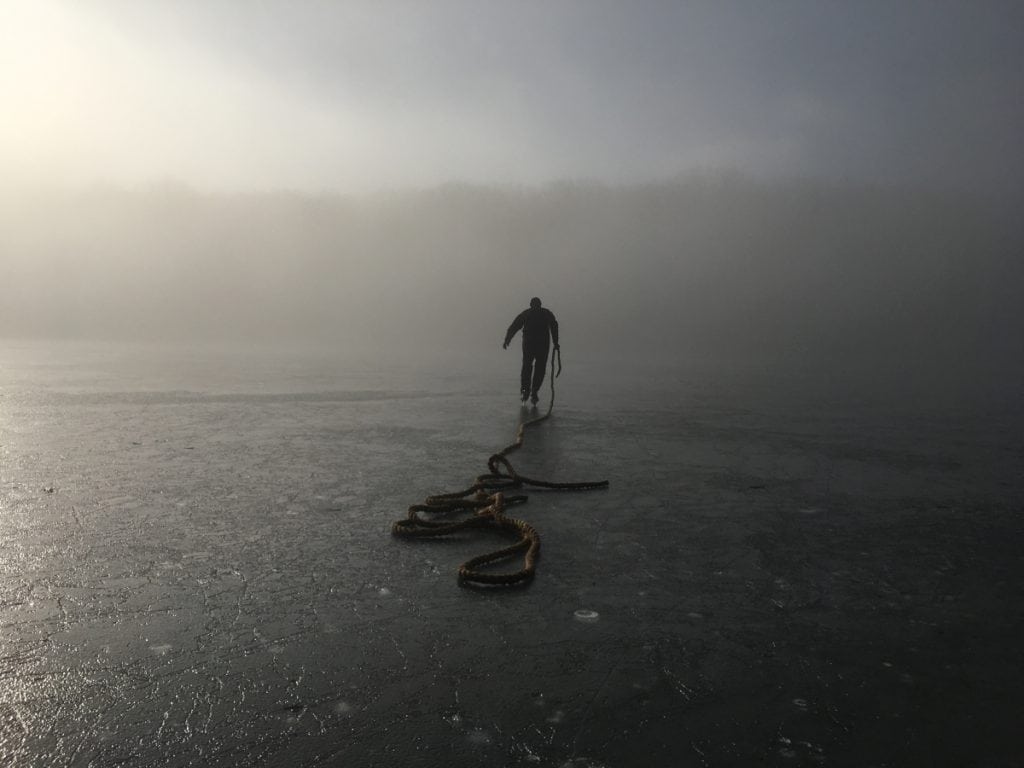 A player drags a rope onto the ice to place behind the goal to prevent the puck from sliding too far. It also serves as a rescue rope during late-season games. (Photo by Tom Ptacek)

A bit of good-natured rough play isn’t the only hazard. Breaking through the ice is almost inevitable, especially in spring when dunkings can occur on the thin outer edges. A safety rope is kept behind the goal; it also helps keep the puck from sliding too far away.

Ptacek says that safety is paramount and that ice thickness is always checked carefully. “We play on the first ice, as soon as it can support a game.”

Foley reflects the players’ nonchalant acceptance of the odd soaking. “It usually happens on a warm day so there is not much concern of hypothermia,” he says. “You shake it off and get back to playing. “

Asked what, if anything, might improve local pond hockey games, Foley replies: “Not much. Just longer winters, which my wife would dread!”

One thought on “Pond Hockey: Skating on Thick Ice”