I am concerned about the exorbitant amount of salt being used on our roads in Philipstown, as well as throughout the region. On Avery Road in Garrison, where I live, town trucks recently applied salt long after an early morning’s insignificant dusting of snow. When that was followed by rain, all that salt washed into Indian Brook, compromising the already imperiled trout stream and aquatic life. 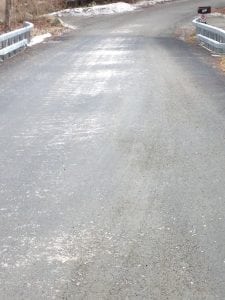 In mid-January the Town Board held a workshop at which water quality issues were discussed, including salt use. Supervisor Richard Shea stated that during any given snowstorm, the amount of salt spread on Philipstown roads by the town, county and state could total between 600 and 1,000 tons. During the course of a typical winter, he said, a total of six inches of salt are put on our roads. Can this be?

We need to come up with a solution to this excessive and destructive practice before the last trout goes belly up, before our cars rust away, before the mature trees along the roads are eaten alive and before we are stuck with another tax increase to pay for this wasteful policy.

One thought on “Letter: Too Much Road Salt?”