Cold Spring’s water supply becomes discolored from time to time and a recent occurrence prompted numerous complaints to Village Hall. We asked Superintendent of Water and Waste Water Greg Phillips to explain why it happens. His responses have been edited and condensed.

What caused the most recent discoloration?
It was brought on by the water main breaks caused by frigid temperatures in early January. Changes in water flow during the repairs caused discoloration that persisted for several weeks, but which has subsided in the past week.

Water before being filtered; filtered; and discolored after passing through pipes (Photos provided)

When does it otherwise occur, and why?
Typically, it is due to changes in water flow rates in the pipes. The greater the rate change, the more significant the discoloration. Also, warmer flows generally cause discoloration more frequently than colder flows, so you see it more often in the summer.

Is it affected by the age of the system?
Yes. Until September 1997, when the Foundry Brook Water Treatment Facility on Fishkill Road went online, water was not filtered or treated for corrosivity. For the better part of 100 years, corrosion was unabated.

Does discoloration occur in other towns and villages?
It happens everywhere, to one extent or another.

What is the solution?
In a perfect scenario, we’d have cement-lined or PVC water mains, properly sized for increased flows, with no dead-end mains. We’d also have enough water and staff to flush the system whenever we wanted. The reality is that there is no simple or inexpensive remedy. The improvements to the Main Street water line in 2013 cost more than $900,000. Doing all the side street lines would cost several times that.

Is there a less costly solution?
Not that I am aware of, other than a more aggressive flushing program, consistently doing two flushes per year. 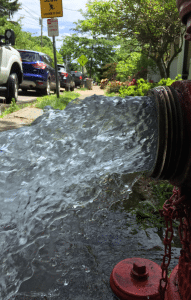 Why do you flush the lines?
The high rate of water passing through the pipes during a flush, up to 1,000 gallons per minute in places, scours the pipe walls, removing any buildup of film, loose particulate and sediment. We also determine if hydrants need to be repaired or replaced.

Are you changing the timing of the flushes?
We used to do it in the late spring and fall, usually June and October. But in the past two years, the reservoirs on Lake Surprise Road have been low toward the end of summer, causing us to cancel the fall flush. This year we are going to try for March and July.

Why do you flush the lines at night?
We would love to flush during the day; it would be safer for workers and easier to coordinate staffing. However, because of the drop in water pressure and discoloration that occurs during the four or five days it takes to do a flush, schools, restaurants, salons and residents would not appreciate it. 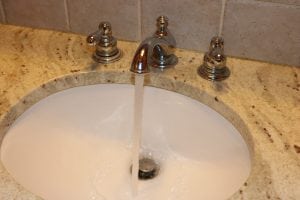 Village water is often discolored after hydrants and lines are flushed. (Photo by M. Turton)

Is there a health risk associated with discolored water?
Discoloration can become a safety issue if chlorine levels become too low; we monitor that diligently. Our drinking water, after filtration, is disinfected with sodium hypochlorite to ward off pathogens. We are required by the New York State Sanitary Code to maintain a residual of free chlorine throughout the system. We monitor five days a week to ensure residual chlorine is sufficient.

We performed extra bacteriological sampling and analysis in January and continue to sample in February. Generally speaking, discoloration is an aesthetic problem, not a health-related issue. However, we cannot be everywhere, all of the time, and cannot speak in absolutes. If water is discolored to the point where you are not comfortable consuming it, a multi-stage water filter can reduce the suspended solids and dissolved solids that are frequently the cause of discoloration.

3 thoughts on “What’s Up with the Water?”