In the wake of the Parkland, Florida, high school shootings, the Haldane Central School District on Thursday (Feb. 22) began locking the main entrances to its middle and high school buildings throughout the school day. For the first time, visitors had to be buzzed in.

Because only the elementary/middle school building has a cafeteria and gym, each of Haldane’s 300 high school students must at some point each day walk between the district’s two main buildings.

In the past, the main entrance doors remained unlocked at the middle and high school to allow easier access for high school students. Three years ago, the district added staff members at both entrances and began to require visitors to sign in, according to Superintendent Diana Bowers, who announced the change in a Feb. 21 letter to parents and community members. The elementary school entrance has always been locked during the day, she said. 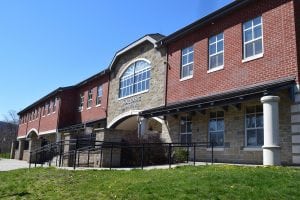 In addition, in the fall of 2015, the county assigned a Putnam County sheriff’s deputy to the district, who is on campus whenever school is in session. His presence is signaled by his squad car parked in the traffic circle between the two buildings.

As of Feb. 22, visitors to Haldane are being asked to show identification, and Bowers said the district plans to add the capability to scan driver’s licenses. She noted the district upgraded many of its safety systems in 2014 after voters passed a bond referendum to pay for it.

“We continually refine safety and security procedures and work closely with first responders and security experts to improve the procedures and protocols within our safety plans,” Bowers wrote. “Our district’s Safety Committee, which includes members of the Cold Spring Police Department, the Putnam County Sheriff’s Department, administrators, teachers and parents, meets regularly to review best practices and implement changes as needed.”

Further, Bowers wrote, “our schools conduct regular drills, including four lockdown drills annually, so all members of the Haldane family know what to do in an emergency situation.”

Putnam County Sheriff Robert Langley Jr. also cited the Parkland shootings in a statement on school safety sent to the news media on Feb. 21. He noted that every school in the county has an emergency response plan on file with his office. Every district also has at least one deputy sheriff on duty, he wrote.

At the Garrison School, which has students from kindergarten through eighth grade, the main entrance door is locked during school hours and visitors, who can be seen from the main office, must be buzzed in and sign in. They do not need to show identification.

“We feel that the school resource officer program is the best preventative measure for not only handling a violent school incident but for addressing many other problems that can affect our youth,” he wrote. “A deputy sheriff at a school gives students and staff someone to interact with and share concerns. These deputies have training specific to working in a school setting and recognizing a threat before it’s carried out.”

The Sheriff’s Department has trained administrators in each school district “on how to manage a mass-casualty incident” using the state Incident Command System, he wrote. (The ICS coordinates emergency responses between various agencies.) Each of his deputies is also trained in how to respond to an “active shooter” at a school, he said.

One thought on “Are Schools Safe Enough?”