Boos and heated debate at forum on gun violence

U.S. Rep. Sean Patrick Maloney on March 3 called for banning the sale of the AR-15 rifles, praising students for “doing a better job than Congress,” and endorsed new initiatives in school security.

The three-term Democrat, whose district includes Philipstown and Beacon, spoke in Poughkeepsie at a forum he organized on gun violence in schools. Constituents sometimes spoke politely; at other times, heatedly; and often at length.

Maloney, who lives in Philipstown, chastised those in the audience of more than 200 who sometimes booed when people spoke. “I’m the one you should boo,” he said. “Your neighbors you don’t get to boo.”

The event, intended to last 60 minutes, continued for nearly two-and-a-half hours. Scheduled for Poughkeepsie High School, it moved to the Family Partnership Center after the school received an unrelated threat of violence, later dismissed. It also reflected national concerns after the Feb. 14 killings of students and teachers at a Parkland, Florida, high school. 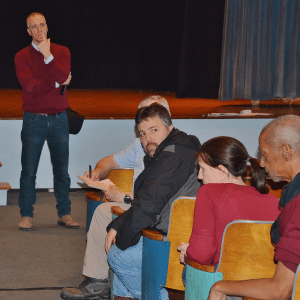 Rep. Sean Patrick Maloney listens to an audience member on March 3 during a forum (Photo by L.S. Armstrong)

Maloney backed more funding for school districts to hire police officers and for mental health treatment but added, “I want to talk about guns, too.”

Freya Wood-Gallagher, a junior at Haldane High School, agreed. “I don’t think it’s possible to take guns out of this issue.” In the Parkland killings, she said, the problem was that the 19-year-old assailant obtained a powerful gun. “You can’t have this mass killing with any other weapon,” she said.

Other teens also spoke; most advocated stronger gun control. A high school student named Grace said she didn’t feel safe at school. “I’m supposed to be worrying about homework and I’m worrying about dying,” she said.

Samuel, a 16-year-old who attends Arlington High School, said students want the federal government to act, and warned that when those with political authority fail to respond to a popular outcry, violent revolution can occur. “If we don’t reform, something will happen,” he cautioned.

This style of AR-15 was used in Parkland to kill 17 people.

“I’d give elections a try first,” Maloney advised. He said “students have been doing a better job than Congress recently” addressing issues such as gun violence, and quipped that voters should replace it with teenagers. “I’ll go, too,” he offered.

Declan, a 17-year-old student at John Jay High School, objected that “people pick on AR-15s.” He criticized proposals to raise the age of gun ownership to 21, as in a bill passed in Florida on Wednesday (March 7).

Declan also argued that a person intent on murder will find a way, suggested that schools ban backpacks and lockers because they can conceal guns, and urged a focus on mental health.

John Collins of Monroe, who mentioned 44 years of military service and a a National Rifle Association membership, echoed that view. “People kill people, and they don’t care what the law says,” he told Maloney. He said he supported a ban on machine guns but not AR-15s.

Maloney said “law-abiding gun owners are not the problem” and assured gun-rights proponents that “I’m really glad you came; I really want you in the conversation.”

He stressed that “you haven’t heard from me that we have to collect every gun in circulation,” but if the AR-15 were out of the picture, “maybe we will save lives.”